Imperial Shipment Is A Front For A High-Level Smuggling Operation


"You can check out any time you like, but you can never leave..."


I've spent most of the last two years running a skateboard shop in my home town on my home planet of Eclipticum. I stayed away from most of the day-to-day news from around New Eden because running a business tends to focus the mind. I even went full domestic: I acquired a house by a lake, some servants, two canines and several short-term lovers, and enjoyed stepping outside into the fresh, rejuvenated air of post-Aritcio-era Eclipticum, not thinking too much about spacecraft, orbital mechanics and complex trade negotiations that always end in firing solutions instead of diplomatic solutions.

In short, I took two years off, during which a degree of stability crept in. Trouble is, stability begets ennui. I'd got to a point with the skateboard shop where I could step back a bit and let someone else run it, and take some time to look up at the night sky more often, seeing the flashes of light from starships transiting the three stargates high above the planet; noticing how once again the planet is in that part of its ten-year orbit around the sun where the Cauldron Nebula becomes visible in the night sky, and reminding myself of what a sight that was when I'm jacked into a capsule, seeing it through wideband visual augmentation. 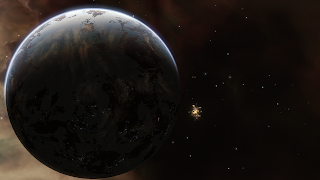 Then last month I took a shuttle up to the Family Bureau station orbiting the planet's inner moon where I had my Anathema docked in deep storage. I had some admin to do there (Dockmasters require paying, apparently) and some housekeeping to do on the ship, because ships in deep storage still need maintenance. In the ship's lounge there was a shelf with a box on it containing some small fragments of structure that I'd salvaged from the wreckage of a Sleeper drone somewhere in the Anoikis Cluster; these relics always scared me because they were constantly warm to the touch. Apparently polymorphic metal does this. It scares me because it could change shape at any moment. 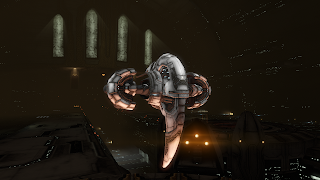 Also on this shelf was a jar containing the embalmed head of a Covenant member that seemed to exhibit an expression of disappointment, another jar full of Rogue Drone capillary fluid (aka Drone Blood), a set of holovids of my favourite show UUA Is So Far Away, a piece of Antikythera Element which hums even though there is no power supply to it, and a bunch of hangar manifests telling me where all my other stuff was. I have 47 frozen capsuleer corpses on ice in Tash-Murkon Prime, four of which I have two of. I'd literally forgotten about that. How the hell did that happen? Fun times...

The ship had been powered-down and dormant for about 22 months, so it took a few rattling pipes and blown bulbs to get the chai machine working again off the ship's batteries. This ship could do 13.39 AU per second in warp, but not today. While I waited for the damned machine to warm up I switched on the view screens and flicked through a few channels. Then a chime sounded and it told me I had over a thousand 'notifications' and a bunch of unopened mails. One of them told me what I already assumed: that being 'inactive' for a long time meant I was no-longer part of [BREH] - no hard feelings chaps, it's normal procedure - and was now a member of the Imperial Shipment corporation. Me and sixty-odd-thousand other capsuleers. I doubt a single one of them is actually engaged in services for 'the shipping company that operates services throughout the Empire'. CONCORD and everybody else knows what's really going on here. What used to be Imperial Shipment is today probably just an office with a desk and an AI auto-responder that never needs feeding and so costs nothing to perform the whitewashing of capsuleer records.

The ship also needed a big firmware update and its cloaking device needed recalibrating, so I had a couple of hours to kill while the work got done. I spent the time flicking through some news articles, updates, holovids, recruitment adverts, just to see what was happening out there. I caught up on The Scope - I hadn't thought too much about the Drifters and this other new entity that they appear to be at war with: the Triglonometry or whatever. I'll wager nothing will come of it, because it never does. It's all the Jovians' fault. I mean those ships seem to have an artificial black hole hanging out the back of them like a hernia. Now that is scary.

I digress. The thing is, I was a free agent. I could wipe the slate clean and start again. That's the funny thing about New Eden: reputations mean everything and yet are meaningless. Nothing is what it seems. Assume everything. Assume nothing.

The Family Bureau station my ship was docked in is the same station that was left semi-derelict and barely functioning after being hammered during the Elder War over a decade earlier. It had been repaired recently and returned to full service. I took this as a sign. 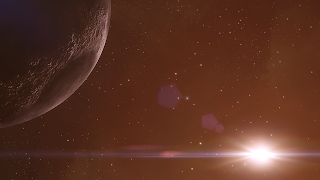 Posted by Cassandra Habalu at 12:33