Set The Controls For The Heart Of The Sun


So I spent all that time in Amarr waiting for the wormhole to pass nearby.

It did, I went back to the dreamworld for a few days, then I had some corp media-related business to deal with, so I came back out and headed for our HQ in Zoohen (our real HQ, not the symbolic one in Thera).

Such is life and its contradictions.

Then I decided to do something constructive while waiting out the wormhole again, unlike last time when I wasted time indulging in decadent cultural irrelevances and too much rich food. Last month I discovered I needed to repair my broken relationship with the Fed. I found this out when I casually entered Fed high-security space in the Solitude region and was presented with the automatic system-wide broadcast warning me that I was a criminal in the eyes of the Fed now, and that the faction police was after me. This had never happened to me before! How rude! If I hadn't been in my interceptor which was the fastest ship in the constellation at the time, I dread to think how it would have gone down.

It was obvious why this had happened: all those missions I had done for agents in the Empire, removing excessively ambitious Fed presences in Empire space, had, at some point, according to CONCORD and the DED's number-based arbitrary accounting system called 'Standings', lowered my negative status with the Fed below the -5 threshold which caused the Fed's law enforcement arm to become interested in me by default. The problem was that I hadn't noticed.

After this, I regained Empire space and did some intense bureaucratic juggling to restore my Standings to a point where I wouldn't get immediately arrested or blown up next time I entered Fed highsec. So with some time on my hands (again), and since Zoohen is right on the Fed border, I decided to take my Prorator into the Fed for a few days and volunteer for some courier/transport work for one of the commercial shipping corporations. My diligence would register with the relevant authorities and I would be at least tolerated in Fed space again.

But that's not what this journal is really about.

This week every ship in the cluster received a new batch of cam drones with upgraded visual processing algorithms. The principal effect of this change is to make stars look much more like the giant balls of raging photosphere that they are. 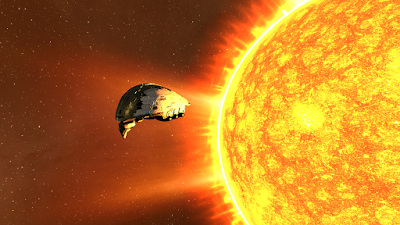 While I transited the border systems en-route to Sinq, I tested out the new cam drones by flying to several of the stars that were on my way, dropping out of warp closer to them than is probably sensible, just to take a look.

Warp drives shift us into a shallow realm of hyperspace, so in the process of reaching a temporary perihelion at each of the stars in question, I flew through some of them, right through their centres, which was weird.

I still dislike doing stuff that shouldn't be possible in this universe... 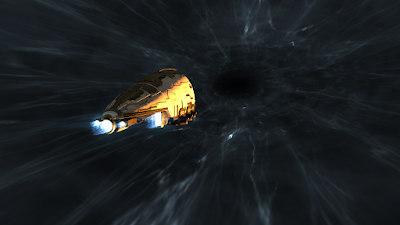 But there's no doubt that seeing ambient light reflecting off ships' hulls exactly as it does for real now, is far more satisfying to look at than the old system, where stars were just blank discs with no detail because there was no perceived need to render it. 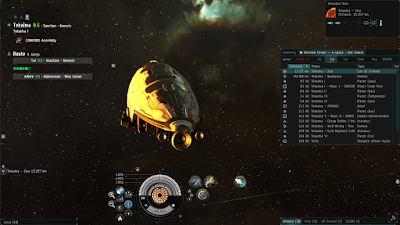 I could have stayed for hours at each star, but I could sense the huge temperature differential being inflicted upon the hull at the distance I was orbiting them, a phenomenon much more visually obvious than it was before. If I stayed here too long the Prorator's interior would become an oven.

The result would be one broiled capsuleer. 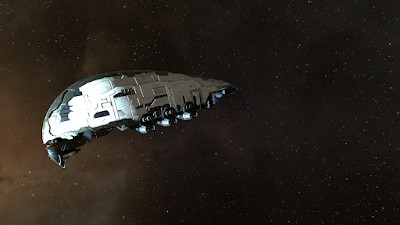 At close range (like several tens-of-thousands of kilometres), a ship's sunlit side is bleached clean of any detail. But then you still get the impossible juxtapositions of faint nebulae still visible behind the overwhelming power of the star's light. This new cam drone upgrade must have been overseen by an artist, not a programmer. 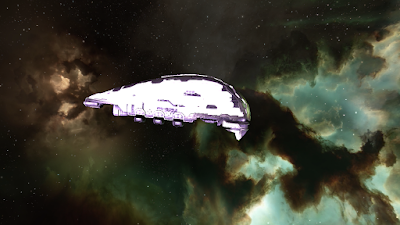 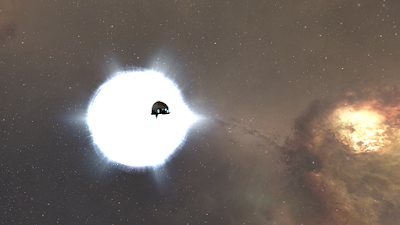 I can't get enough of it. I still, and never will understand how some capsuleers get blasé about the view outside. It never gets old. It never gets boring. 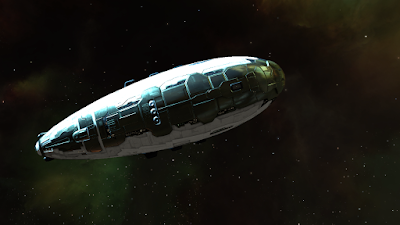 Even the TransStellar Shipping station orbiting Adiere X that I docked in had a faint pink tint to its slate grey hull that it never would have had under the old system. 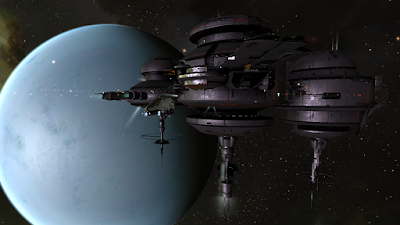 Fact: this upgrade means the awesome visual wealth of New Eden has improved even further, and only us capsuleers get to see it like this.

What a time to be immortal.

Posted by Cassandra Habalu at 17:31 No comments: