For Everything There Is A Season

I can tell you exactly when it happened; when the decision was finally made.

When I finally called time.

I was doing my regular freight run from [PHP1]'s heartland in Rilera, my Impel station-keeping next to a silo waiting for its contents of exotic metals to be loaded into the hold. I was passing the time: a cutting-edge playlist on the audio, multiple comms channels open, a seriously ancient Aridian literary classic on quickscan. None of this existing in physical form since I'm jacked-in. 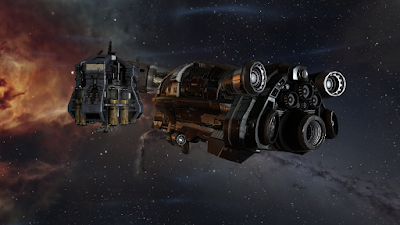 The NEOCOM chimed (in my head again, because I'm jacked-in) with the arrival of a message from the boss. It was a sitrep, a rallying morale-booster for the troops. For me it was the fork in the road. 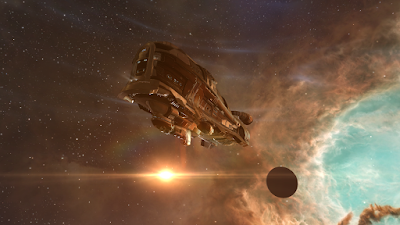 [PHP1] has multiple POS silos in Rilera so I visited them all in turn, emptying them, ensuring a full hold because unused hold is wasted ISK. Quantum Leap's stately progress between POSes gave plenty of time to think about how it's been for the past year-and-a-bit.

When I first joined [PHP1], I was horrendously inexperienced, even naive. I was recruited in unorthodox fashion, by being ganked in Tegheon by Gettosmurf, who operated on the premise of 'if they can't beat you, invite them to join you'. Later on he gave me a Daredevil frigate and asked for nothing in return.

I still have that Daredevil. 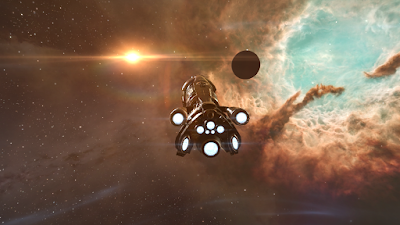 Between then and now, with Outdated Host Productions, I learned how to actually function as a capsuleer instead of how the books tell you to. I now know that I was incredibly lucky in the sense that the first independent capsuleer corporation that I joined after graduating from Hedion University was a fundamentally good one. I hear so many horror-stories of inexperienced capsuleers being robbed, shafted, exploited, ruined by badly-run outfits with criminal agendas.

I have had no bad experiences in [PHP1].

Being a pacifist in a combat-focused corporation and alliance was always going to be problematic in the end though, and I can't justify it anymore. Khanid space has evolved, [PHP1] has evolved, and so have I. Our paths have diverged in what is just the normal cycle of capsuleer evolution and the way of the universe. 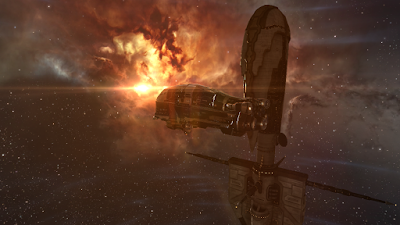 Somewhere between Rilera II and III, I made the call.

Time to move on.

I already know where I'm going. I've heard the signal...

So from now on the journal will be less about regional capsuleer politics and more of a return to exploration, discovery, and documenting the weird and wonderful sights of the cluster with Signal Cartel.

Here's the thing: change is constant and nothing ever stays the same. To any newly-qualified capsuleers reading this: a year from now you won't be doing the same thing that you're doing now, and it probably won't be with the same group. You won't be living in the same place because the life of a capsuleer is semi-nomadic. You won't even realise the change is happening.

I didn't know this time last year I'd ever contemplate living in the northern part of Genesis where Signal Cartel has a base. In fact I didn't even know last month.

This is how it is.

Now I've got a big move op to coordinate...
Posted by Cassandra Habalu at 11:38 2 comments:


The last time I tried to visit this place was the first time I died. 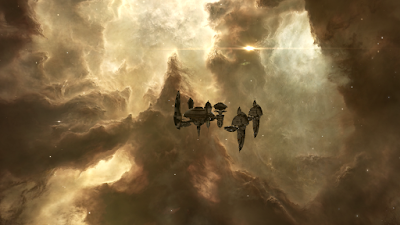 That was well over a year ago. I've died several more times since then and a lot more has changed besides, both to me and to the owners of this relic of an ostentatious past.

The Traumark Installation is in an isolated part of the Saminer system, which is at the southern extent of the Tash-Murkon region and at the end of a 'pipe' of low security space. The system is one of the southern extremities of the Amarr Empire and beyond here is nothing until the wastes of southern nullsec.

It is seriously remote. 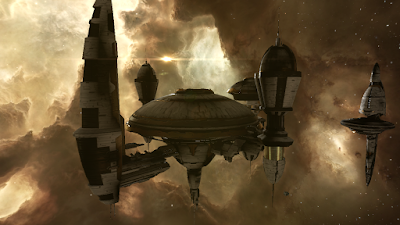 House Tash-Murkon built the Traumark Installation ages ago as a monument to their legitimacy as a ruling family and as a visible demonstration of wealth; a self-indulgent exercise in vanity with no expense spared. Why House Tash-Murkon built it out here in Saminer though, instead of in the heart of their region where it would have been more visible, is not clear. Perhaps it was in part a form of holiday resort, a gigantic luxury villa for tens of thousands of favoured House acolytes and business partners, populated during an earlier period of overt prosperity and calm here in the Anidaza constellation, before Sansha moved in. 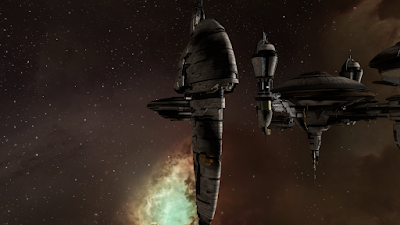 Information about the facility and its exact fate is restricted, as is common with anything in the Amarr Empire that constitutes visible evidence of failure. We know the official version: the Installation had its time, its pomp and ceremony, but at some point in the past this remote part of the Tash-Murkon region was overrun by Sansha's Nation and effectively laid waste. The system was downgraded to lowsec, the Traumark Installation was evacuated; and wrecked, looted and destroyed by Sansha, leaving these massive derelict husks behind with visible evidence of conflict scarring their outer hulls. Time froze for them then. House Tash-Murkon withdrew, and orchestrated a collective forgetting. 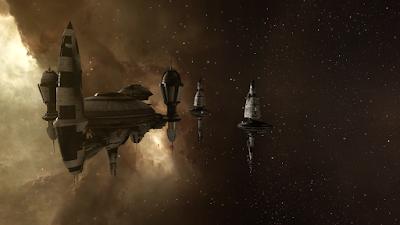 On the evidence that I found when I arrived, there could still be some pockets of Sansha fanaticism hiding in there, handfuls of undead, stalking perma-dark corridors in zero-G like wraiths, never understanding what their flashbacks of a former life actually mean. On the other hand those towers probably are as dead as they look, but the handful of Sansha's Nation vessels hanging around them, waiting to prey on passing trade, at least raise the possibility of it. 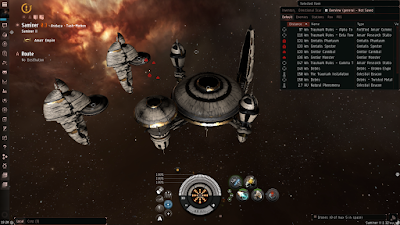 The Saminer system is deep lowsec. As I said at the start of this, the last time I tried to visit the Traumark Installation, I was fresh out of Hedion University and totally clueless, doing everything by the book. I didn't even get to Saminer; I got ganked in the Sagain system next door by a frothing, foaming-at-the-mouth boostered-up scumbag in a Gnosis, who sent me back to Conoban by the pod express, where Taltha regenerated me. For bringing me to Taltha, I should probably thank him.

This time I used my Astero, which was built for this sort of op (lowsec tourism). The principal risk in Saminer now is not Sansha, but nullsec capsuleers that use the system to bring jump freighters into Empire space by the backdoor. On this occasion though, Saminer was deserted apart from me and those Sansha ships, to which I was invisible and undetectable. 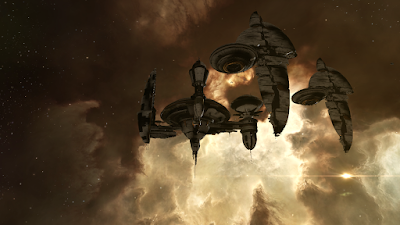 On seeing it now, for the first time, I understood how massive the Traumark Installation really is. It actually dwarfs anything in the Throne Worlds. Three full-sized stations, totally inert, still retaining bits of their gold armour plate, long-since dulled by the sleet of cosmic radiation and tarnished by the arrow of time. Fragments of shattered metal drift around it as if gravitationally-bound to this edifice to thwarted ambition. You really wonder what it might have become if Sansha hadn't purged its soul forever.

As usual with places like this, I departed with more questions than I'd had when I arrived, which is the torment of every explorer. If only I could dock, unjack, suit-up and go inside that huge central dome where it would be as cold as the surrounding vacuum.

As cold as Sansha's heart.

Who the hell knows what relics are left inside there. 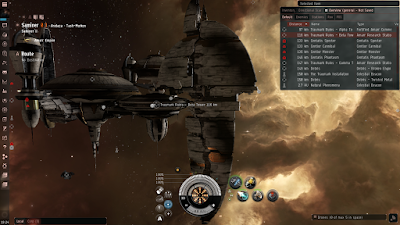 A thought occurred to me while I was speeding back to Tash-Murkon Prime: it is timely that I returned to Saminer and finally got a look at this epic ruin, with its spellbinding backdrop of the Domain Nebula - the heart of the Empire - because later this year, Empress-elect Catiz Tash-Murkon will ascend the Throne of Amarr and all of what lies within (and without) that nebula will be hers. Perhaps she will look favourably upon this forsaken relic of her family's past and restore it. 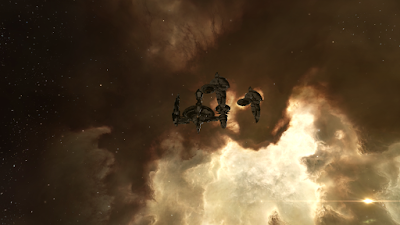 Posted by Cassandra Habalu at 15:45 2 comments:

This Is Your Nightmare Scenario

Long story/short version: our Citadel in Ashmarir was attacked again, this time by a combination of CVA and Volition Cult and some other stragglers/bit-part players whose names are basically irrelevant, because they're all singing from the same hymnsheet that never ends.

CVA/Volition's fleet was much larger than last time, and their tactics included positioning some of it on the Ashmarir - Claini stargate in an attempt to intercept us lot as we were inbound from Gehi. It was a disturbing sight: 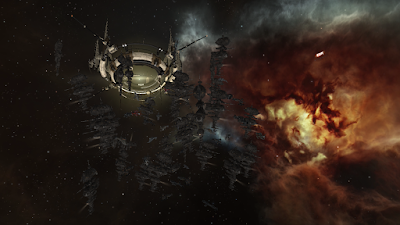 This abomination is a fleet of Nightmares. Hideous ex-Sansha's Nation battleships, designed to instil horror in the onlooker and normally crewed - although unlikely in this case - by Kuvakei's minions whose lifestyle makes Amarrian slaves appear spontaneous and unpredictable. This fleet will have been crewed by capsuleers and God-knows what else. It's an indication of how far removed from baseline some capsuleers must be.

Twice I saw neutral vessels arrive in-system through the stargate and be confronted with this situation. I empathised with those ships' crews, because there are gate camps and there is blatant overkill. This is why I have no future in piracy. 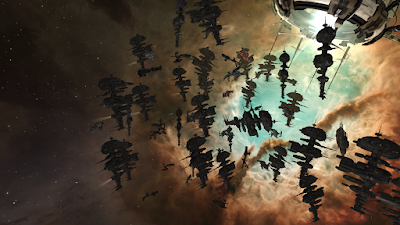 The worst bit was witnessing this obscenity depart the stargate en-masse, the entire fleet aligning simultaneously with millisecond precision, as if the ships were not even manned; as if they were relentless automata controlled by a hive mind with the patience of geology: 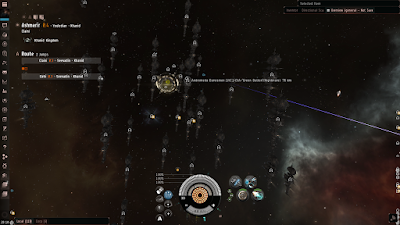 This sort of thing is liable to turn one religious again. I must be cleansed of this sight. Does anyone know what the plural noun for Nightmares is?
Posted by Cassandra Habalu at 19:07 No comments: