I’d stayed overnight in the Chamemi system, which is 0.4 and to the galactic northwest of the trade hub in Agil in Khanid. I stayed there because I’d had too much fun cleaning out Blood Raider bases in the Maller and couldn’t be bothered to head all the way back to my hangar in Agil. I think the Maller’s crew were getting scared too. I’ve never met any of them. When I’m jacked into the capsule I’m swimming in neuro-embryonic fluid and in a sealed-off part of the ship. All I hear are their voices. Voices in my head… 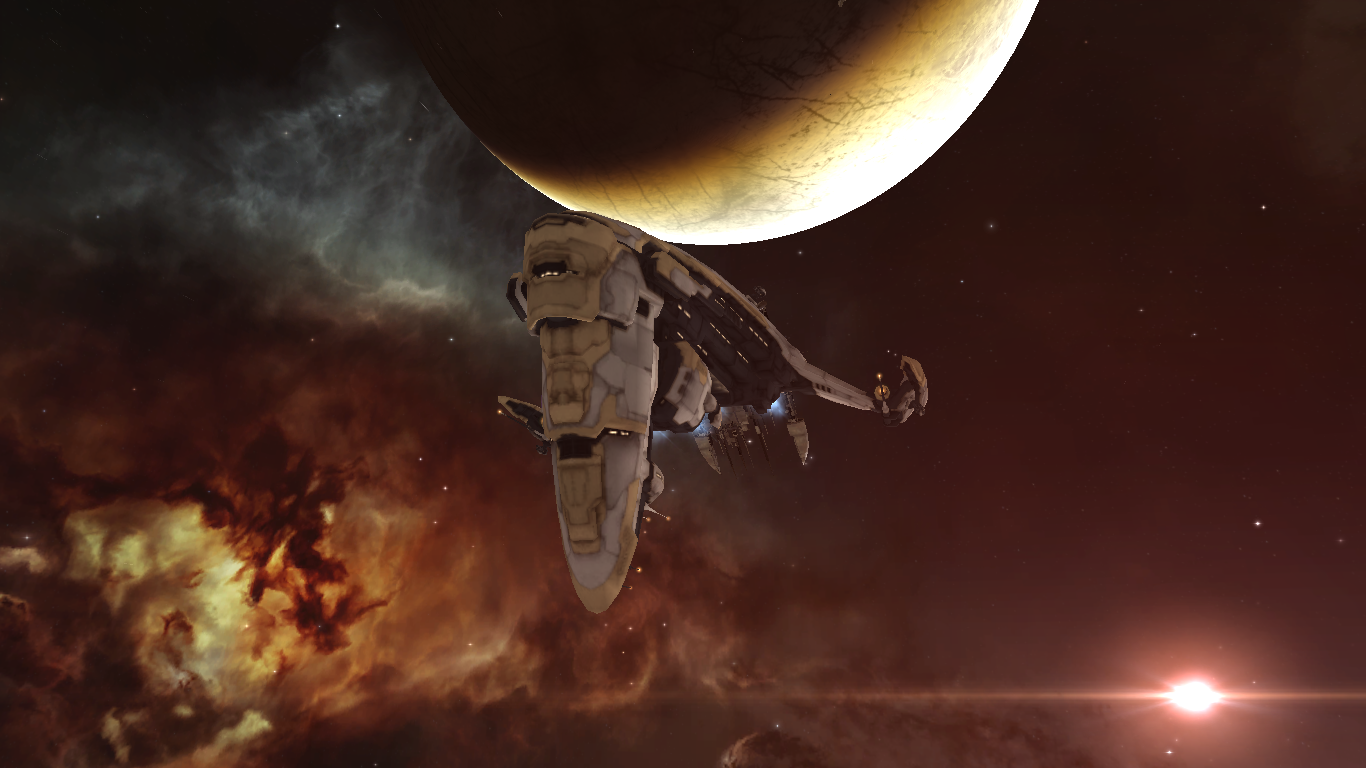 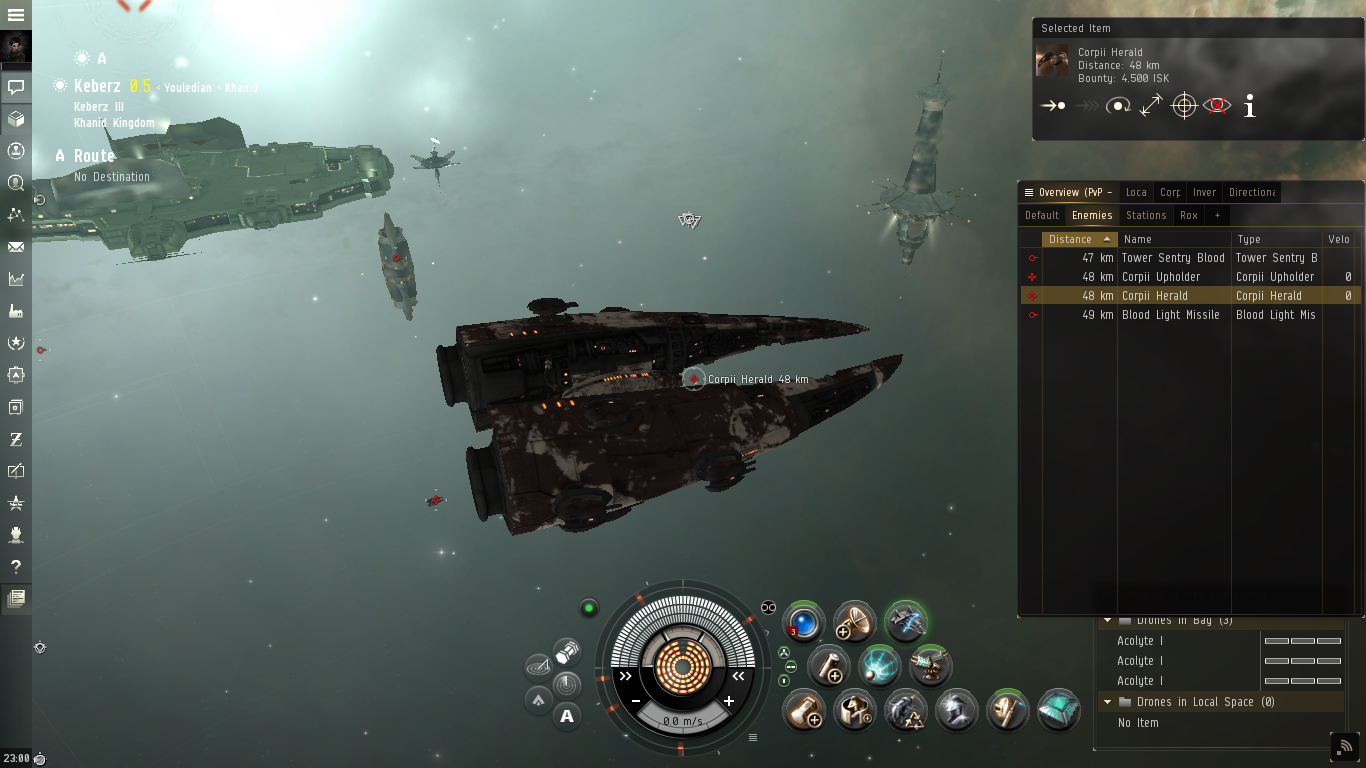 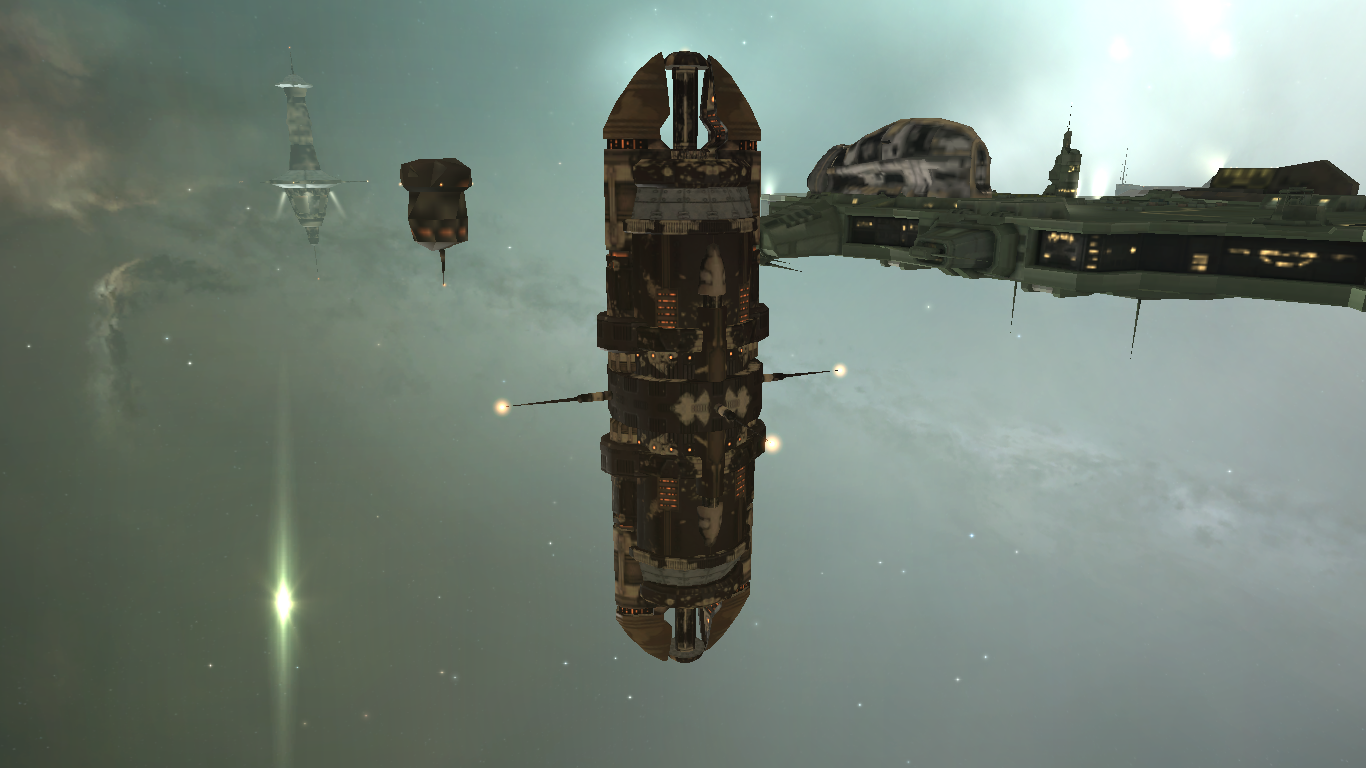 It was an odd situation in Chamemi too, because it became apparent that every ship and capsuleer in the system was actually docked there in the station at the hour in question. Everybody must have finished wreaking lowsec havoc for the night. 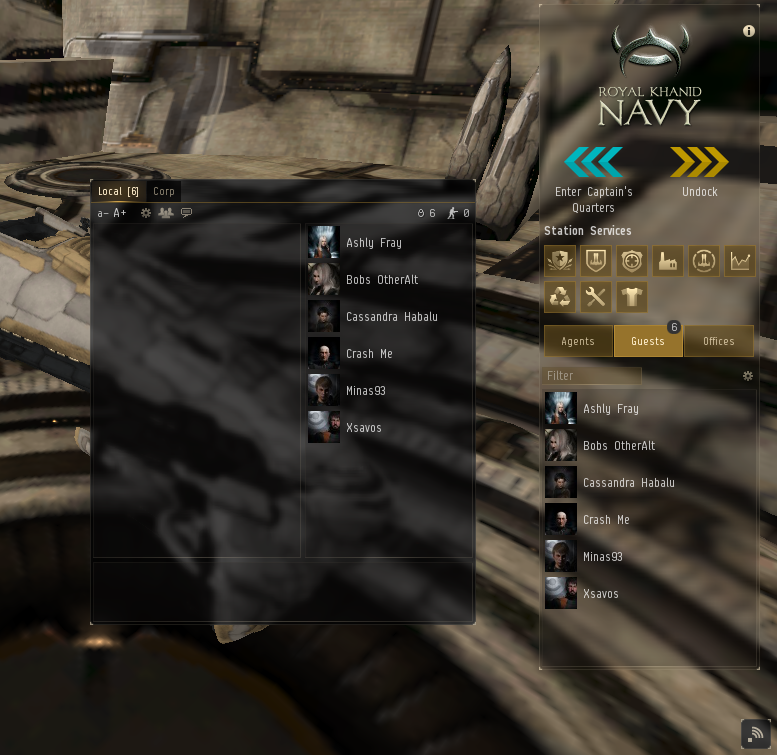 The next day I undocked with the intention of heading back to Conoban via a route through the centre of Khanid, up to the Moniyyuku junction and back into Kor-Azor through K-A Prime. It involved some quality lowsec. Thing is, I broke my own rules again and lingered in Teghion (0.4) while taking on another Blood Raider hideout. I got jumped on by a couple of capsuleers who warped in and started on me. My crew went mad, which made me wonder what they‘d signed up for in the first place. I tried to tell them that this time it should be fine ‘cos hey, we’re in a Maller, but I knew what was coming…

You see what troubles me, and once again highlights my combat inexperience, is that I didn’t even realise that my ship had actually come to a dead stop for reasons that I can’t even remember. I know I managed to target one of them, and I may even have got my Targeting Disruptor fired up, and if I did, I managed to make this battle last at least a few seconds longer than the last one. But sure enough, the Maller and its crew evaporated around me in a ball of plasma. I tried to get away in the capsule but one of them had warp-scrambled me so I resigned myself to the inevitability that I was about to wake up in Conoban again. At least now I know it doesn’t hurt in the slightest (and cloning gives me the rejuvenated skin of a teenager for a couple of weeks, which is nice).

I woke up in the familiar glass tube, with the usual mental fuzziness, the feeling of newness, and Taltha’s face looking back at me from outside.

“What have you done this time?”, she said, with a smirk.

A few hours later I was back in my Quarters in Hedion U with Taltha, indulging in her particular brand of “Personal Revivification Therapy”. I reviewed my messages, most of which I was expecting: CONCORD, the insurance company, the clone thing from Hedion U, blah blah - I‘m used to this now. Then there was a message from a Niir Deninard. This was one of the pirates that had just killed me.

The message read: “I hope that kill didn’t set you back too badly?”

This interested me. This was something different. It reminded me of the Old Earth 20th Century cultural figure John Le Carre, who said: “After all, if you’re going to kill a man, you might as well be polite about it.”

I replied with something like no, nearly got out of there anyway, the ship was insured etc. Then, thanks to New Eden’s miraculous and instantaneous FTL comms tech, Deninard replied instantly and we got into a conversation via text-only about my Maller, tactics (I had none), lowsec (dangerous and full of pirates, yes, but I don’t want to be one of those permanent rookies who never leaves 0.9), and finally, an invitation to join Deninard’s corporation, the Outdated Host Productions and their associates in the TALOS Coalition.

Taltha saw all this. She said: “Do it. Don’t hesitate. You can’t stay in Hedion U forever you know. It’s only meant to be a training corporation, as idealistic as it may be.”

I thought about this for 10 seconds, and decided she was absolutely right. 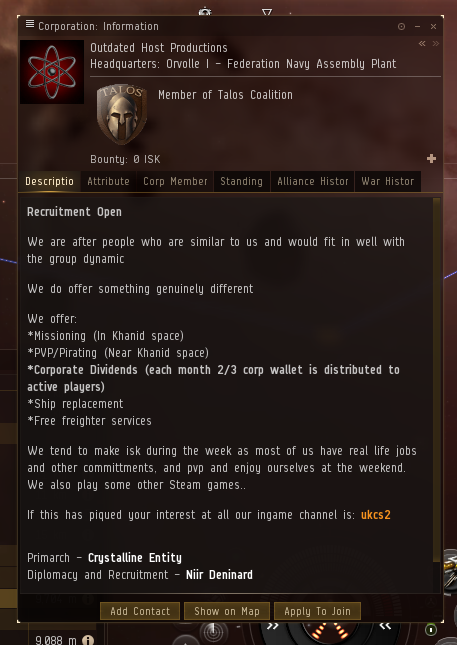 I clicked on “accept invitation”. As of now I’m in a real-live capsuleer-run corporation, and no longer part of Hedion U. You can see our logo up there at the top left of this page. Hedion U has been great for a number of reasons, not least the free basing in Conoban and access to all the agents and their training programmes, but Hedion U has over 177,000 members, very (very) few of whom I’ve ever met. Outdated Host has 33 members, so this is a corporation I’ll be making a direct contribution to, where I hope my membership makes a difference. It’s unlikely I’d ever make a direct contribution to Hedion U the same way.

Joining this corporation is the start of the real capsuleer adventure. It’s why, when I was a kid, I wanted to become a capsuleer after seeing the stargate above Eclipticum light up at night with the ceaseless traffic of New Eden commerce. 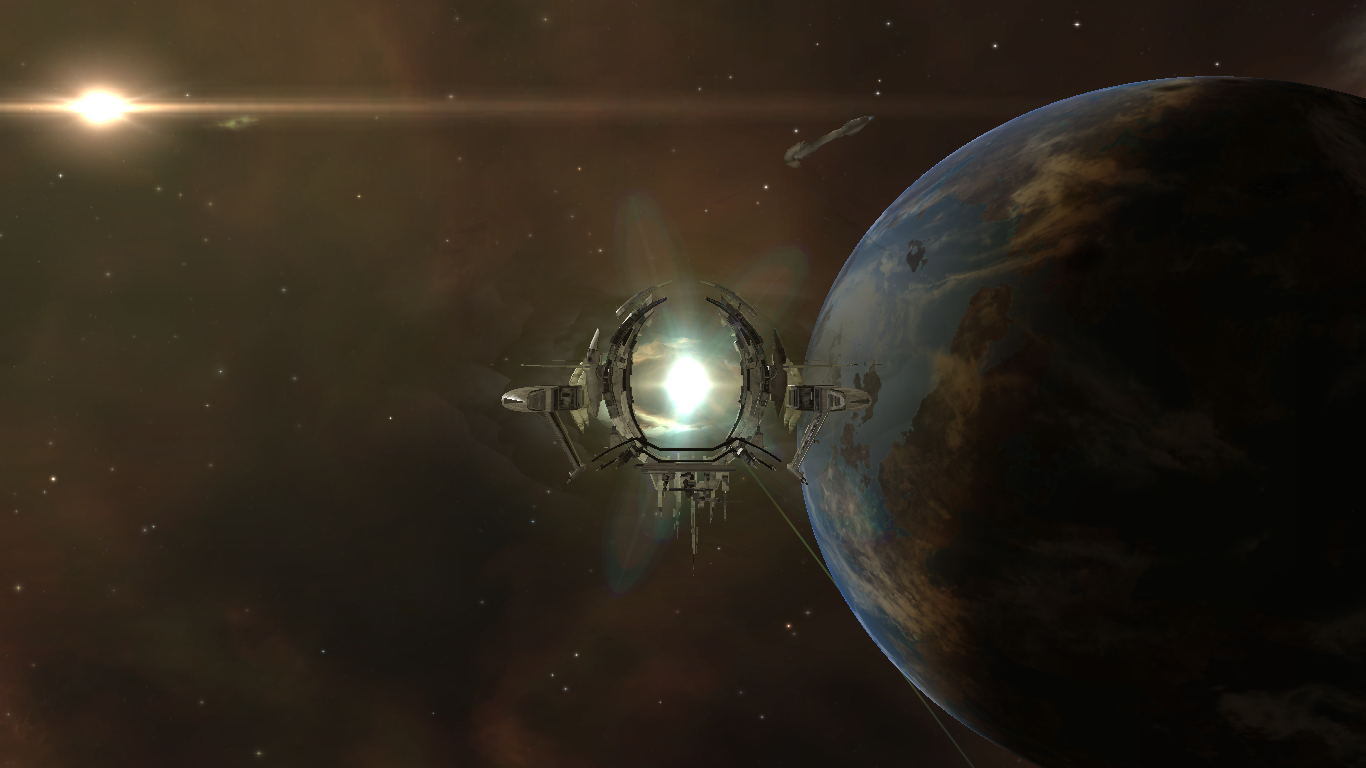 Everything I’ve done up to now was just more training…

Posted by Cassandra Habalu at 04:26 No comments:

The first time I went to Amarr I bought something that happened to be residing in the Sarum Prime system, birthplace of our great Empress Jamyl I the Cloned Capsuleer (my title), who always looks slightly weary in the holoportraits I've seen of her, and who I'd love to take out on a bar crawl with my Ni-Kunni lot back in Conoban. I'm absolutely certain she'd be up for it, if I could get near enough to her to ask (at least the alleged peaceful half of her would be). An incognito Empress in a bar - what a coup that would be. The kudos I would get: hi everyone, this is Jamyl. Does she look familiar?

Jamyl's home of Sarum Prime itself is the site of the Mekhios Graveyard, available to visit and marked on the star map under DED Agent Site Reports. The Battle of Mekhios was the climactic event during the brief Elder War in YC110, when the Minmatar Elder Fleet showed up at Sarum Prime with the intention of releasing all the Minmatar slaves and doing some damage at the same time.

Unfortunately for them, Jamyl Sarum arrived - or "came back from the dead" (she had been presumed dead after the Succession Trials at least two years earlier) in an Abaddon and single-handedly laid waste to the Minmatar by using a doomsday weapon of unknown origin. Rumours still circulate that the weapon was derived from recovered Old Earth tech, far in advance of ours. The site of this final battle is memorialised and retained in orbit around Sarum Prime. It's a damn impressive sight - whole battleships ripped in two. 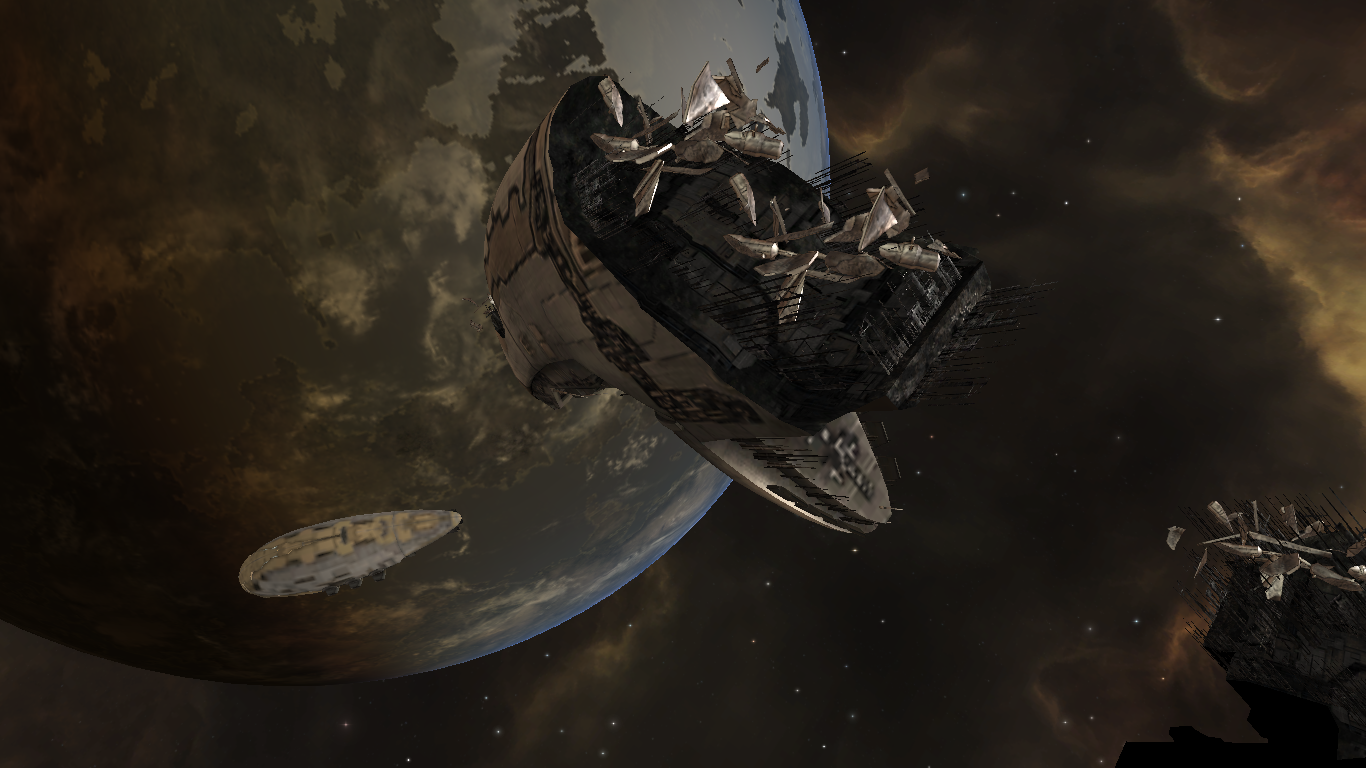 Of course in the eyes of pious and gullible Amarrians, Jamyl used her magical divine power as handed down to her from God. There was an Old Earth cultural figure called Arthur C. Clarke who said: "any sufficiently advanced technology is indistinguishable from magic". Look at what the Drifters are doing with the "Prong Drive" on their battleships. It's not magic, it's just advanced tech; but you can make people believe it's magic if they're receptive enough...

Mekhios Graveyard is all the more impressive for having the incredible Domain Nebula as a backdrop: 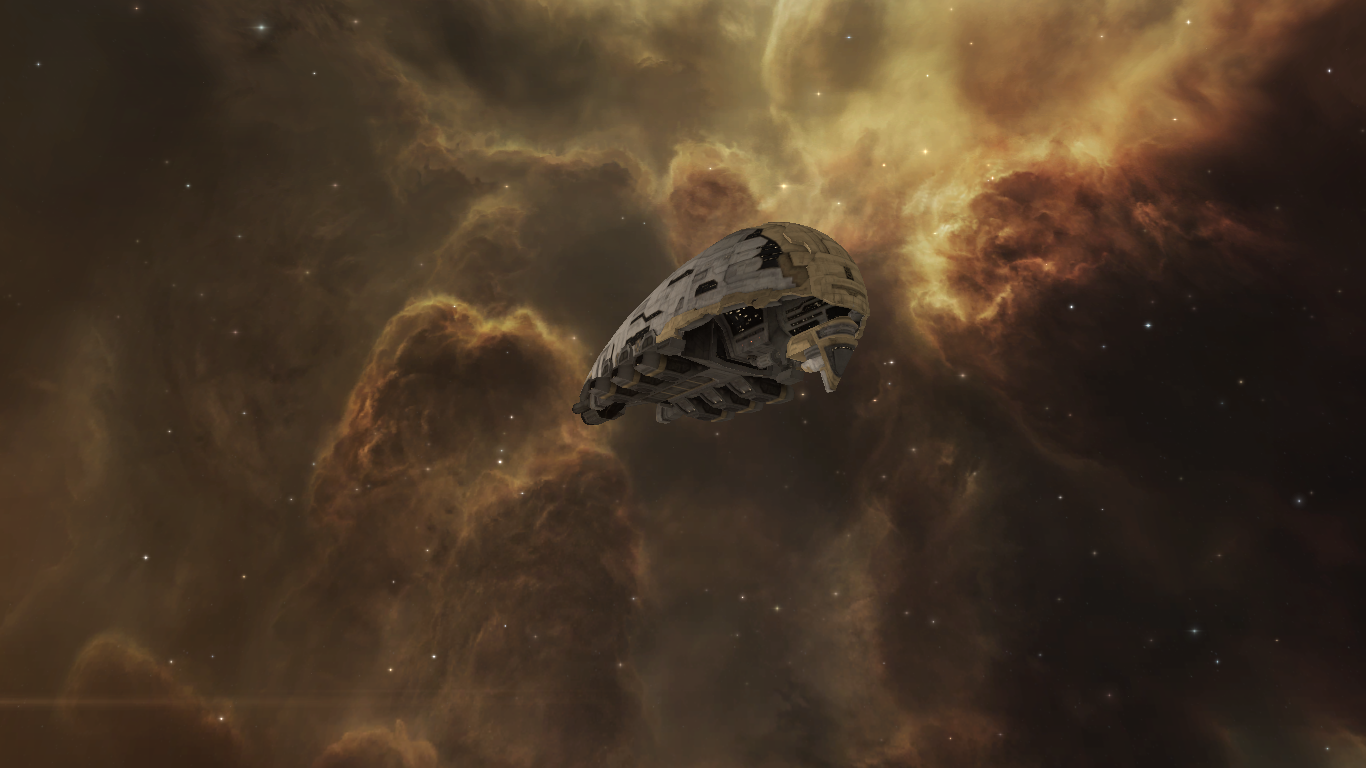 Posted by Cassandra Habalu at 12:30 No comments: