There is a capsuleer expression associated with a version of the rage and anger that is one of the favourite empyrean mindsets:

There are four essential ingredients to salt: entitlement, a sense of injustice, and the tears of defeat and humiliation. You can mix them in any order you like, but they must all be present.

That ancient card game I occasionally dabble with has the phrase 'entitlement tilt', which is about getting angry because you were beaten when you expected an effortless win, so complacency is a vital ingredient too, although not always necessary (think of it as a luxury requirement for high-end salt).

Thanks to corp bro Garen for distributing this masterpiece of salty entitlement tilt from one of our current enemy Pandemic Horde, which was so special it arrived in Garen's personal mail, one-to-one. It's the one-liners at either end; it might not seem much, but sometimes one line is all it takes (don't forget to read the exchange in reverse order): 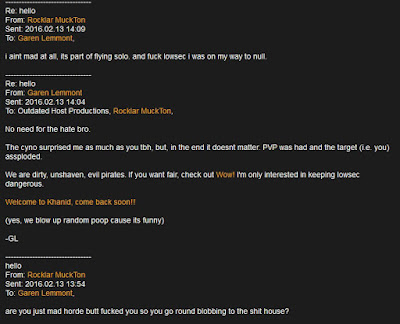 See the dude's mistake is to assume he's entitled to pass through our patch of Khanid Lowsec with impunity, just because he's 'on the way to null'. Just because he's got more important things to do. What a load of dreck - remember the one about 'consenting to lose your ship every time you undock?'

By means of antagonism and provocation, some people mine salt like this (like Garen did above). If you are one of those capsuleers then [PHP1] wants to hear from you. Come to Khanid and join us for premium salt-mining opportunities!
Posted by Cassandra Habalu at 04:33 No comments:

Khanid: What A Time To Be Alive

Meanwhile, back in Khanid, the political situation in the separate universe of the empyreans has changed totally since the last time I reported on it. Where once it was MORTR and DRWIN and the Khanid Coalition against enemies that I can't even remember, now it's DRWIN vs Pandemic Horde locked in a battle throughout Southern Khanid for valuable resource-rich moons otherwise known as 'R64s'. The Royal Khanid Navy remains content to leave us to it. 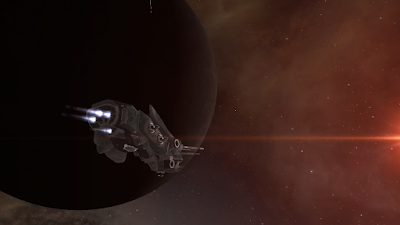 I was going to get into an update on the current state of affairs in Khanid Lowsec, but then I got the text below from corporation boss Crystalline Entity yesterday. He wrote it in the third person. He must have been on the kanar again.

Much had changed. Mortum Ravagers collapsed due to conflicts within its leadership structure as to the direction of the alliance. Some individuals had left to launch a campaign in Immensea as part of the Darkness coalition. Others had left to join The Initiative and aid them in their wars - a war without end, the black universe of New Eden. 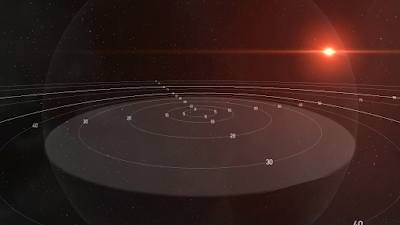 It was said that the ancestors that founded New Eden had been looking to escape the violence of their galaxy. How that had failed...

The remaining Mortum corporations polled their members and elected to join the Darwinism alliance. Darwinism was always the primary leader alliance in the Khanid Coalition and seemed to be the logical choice. 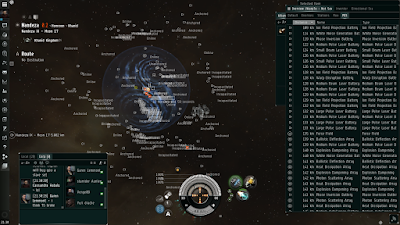 Pandemic Horde are now the new enemy. Horde is made up of pilots that are individually skill-poor and pretty bad when you catch one on their own, but when Horde is poked as a whole, they can pull 150-man fleets together easily and never without their parent alliance being far away to tell them what to do (although they always claim they can stand on their own collective two feet). Darwinism has to call in many favours from a number of different alliances to match those numbers, although Horde always spins it to their members that they have more "groups" facing them instead of numbers. Heh, spin!

Darwinism continues to be very effective pirates but sometimes struggles in large fleet engagements, purely because the numbers involved on each side is usually the deciding factor, and Horde remains able to call on a large agency of capsuleers whose ambition outweighs their talent (and where that talent appears limited to the ability to talk smack in Local). 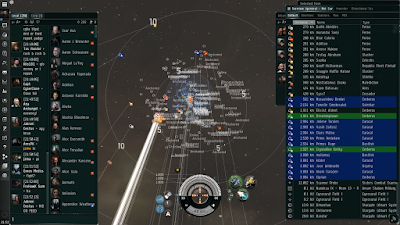 There had been five large scale engagements against Horde over the past few months, all over valuable towers. Only one engagement could be truly considered a proper victory. Let the academics argue over ISK-equivalent-killed vs number-of-ships-lost vs ships-holding-the-field, thought Crystalline as he poured himself another glass of kanar. 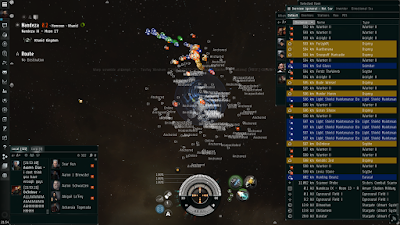 Our corporation Outdated Host Productions is doing well with a number of new active and keen members being recruited since Mortum fell apart. Combat activity continues to increase in Khanid (even if losses are mounting more heavily than expected) and the region is an ongoing buzz of activity.


These are good times. Special projects are underway, doctrines and tactics are improving constantly and the battle for Khanid and Querious is intensifying.


[PHP1] continues to recruit. Wanna try something new? Come to Khanid and join us!
Posted by Cassandra Habalu at 11:41 No comments: