Back Where It All Started Nine Lifetimes Ago

I had cause to pass through the Sehmy system. I can't remember why I was there except that Sehmy is part of the Gebem Triangle, where you can get to four different regions in three or four jumps. I think I may have just felt like a change while doing the route to the trade hub in Amarr that I seem to do about twice per week currently.

Sehmy is of course where I and so many other Amarrian capsuleers did our initial training in the complete theory and basic principles of starship operation at the Hedion University facility. Very soon after qualifying and launching into hard vacuum for the first time, and letting my brand new Impairor feel the warmth of the stellar wind and the sleet of cosmic rays fall upon its unburnished gold hull, I moved to Conoban for the advanced training syllabus at the other Hedion University place - the multi-discipline part where I started acquiring ships (two of which I've still got) and equipment.

I haven't been back to Sehmy more than a handful of times since, with ever-increasing time intervals between visits. As with all the Empire's 'training systems', there is essentially no reason to visit Sehmy unless you have specific business at the University or you are a planet-dweller en-route to the bizarre, undersized jungle world of Sehmy III (take your respirator and copious bug repellant. One visit is all you'll need). 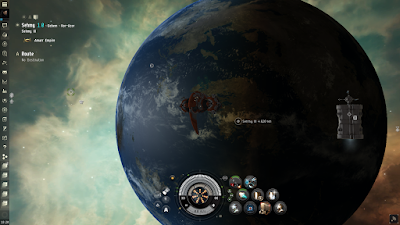 Now I am well aware that I am not an experienced capsuleer. It is still much less than a year since I left Sehmy, yet it feels like a thousand. Perhaps that is because I am not in the same body I was in when I left, and that it is technically nine lifetimes since then. I think of all the starships I've acquired since; how I've learned to fly cruisers with a human crew component; how I've learned to operate ships built by what are supposed to be deadly enemies; the places I've been to - Anoikis itself, Mishi IV, various regions of hard null, the Drone Lands, the Thera system with its artefacts - places I used to only see in holovids and that most ground-dwellers will never know.

I've 'met' the Sleepers and the Drifters. I've nearly made my first billion ISK, which would technically make me the wealthiest person on Mishi IV by a considerable margin. I've killed people - all unseen, never face-to-face. I've felt the pain that a starship feels when it is struck by weapons fire and the savage disconnecting jump cut of a transneural burning scanner. I've seen the constant bustle of the trade hubs and preferred the calm of an empty docking bay in Aridia. I witnessed the assassination of an Empress. I've walked the surfaces of planets that I barely knew existed. There are thousands more.

I thought of all this while I held station twenty kilometres off my former academy and watched rookie capsuleers come and go. A couple of them seemed to have qualified only yesterday. 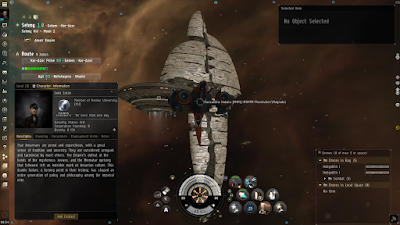 One particularly exuberant rookie started a conversation in the Local channel:

"battlecruiser's not going to buy itself"


I thought: "I've been there. I know what it's like to say that sort of thing without a trace of irony."

In the student bars, my class would talk about Empress Jamyl's Abaddon and about what we would have done differently.

And we meant it.

I have probably 1% of the experience of many capsuleers, yet I already feel like a veteran and yet I still know nothing. The difference between me and the rookies is that I know I know nothing; and the more I see, the less I understand...

[NB: the willingness to build a battleship from scratch is to be commended, but not on your own, and not with a Venture. It'll take a hundred years just to mine it all...]

Posted by Cassandra Habalu at 12:37 No comments: