Party in Ashmarir: Darwinism vs CVA

Curatores Veritatis Alliance, well-known Amarr loyalists and self-styled Gatekeepers of Providence, came out of nowhere this week and attacked our new Citadel in the Ashmarir system.

This wasn't all we've had to put up with this week, what with the ongoing personal vendetta of Musashibou Benkei - the Renegade of Khanid - and his ex-Bergmann/ex-Darwinism followers that all have the attention spans of children.

Back on topic: Ashmarir is one of the gateway systems to the soon-to-be-established Independent Empyrean Republic of Khanidistan. It is at the 'east' end of Khanid Lowsec and is otherwise an unremarkable system with no mainstream stations, three uninhabited terrestrials (uninhabited as far as can be determined, although you can never rule out uncharted pockets of madness, survivalism, religious extremism and hermitry), and token capsuleer industry based around a handful of resource-poor moons.

Ashmarir is not that big a deal, or at least it wasn't until we put our Citadel there.

Earlier this week, a CVA fleet manifested in Ashmarir and attacked our Citadel. We left them to it because of the Citadel's ability to withstand an initial assault. CVA made their statement and left.

We had 24 hours to prepare for their return.

When they returned, we were ready in ways we've never been before. In other words, we put some thought into it instead of winging it. The ultra-reliable Lowsechnaya Sholupen also showed up to assist us on the premise of any excuse for a party.

We were outnumbered at least 2-1 by CVA , but we still repelled them because we had Dreads and they didn't. Check out the cam drone stills and telemetry below. 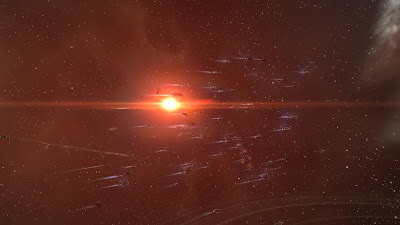 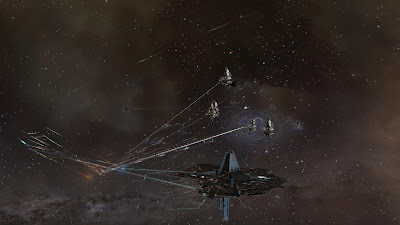 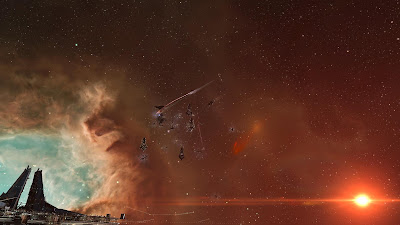 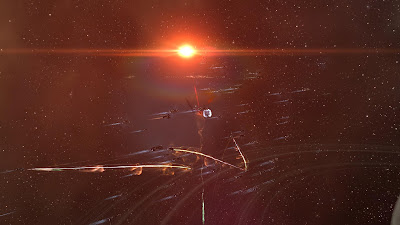 I hate to gloat, but we did in fact cane CVA and force them to withdraw.

Noteworthy: Lowsechnaya deployed some examples of the new Apostle-class Force Auxiliary ship - the new paradigm in capital starship combat. I never saw one in the flesh before so I never appreciated how damned big they are. I mention the Apostle because the Imperial Fleet's naval architects went to the trouble of designing the Apostle with armour that depicts a stylized mural of the 'Martyrdom Of Empress Jamyl At Safizon by the Drifters'.

A design statement like that is only ever about propaganda rather than operational requirement, so there is intense irony here in that we used Apostles against an Amarr loyalist alliance. Few other capsuleers involved in this skirmish would have given this issue a moment's consideration, but I look for stuff like this, which is why the idea of CVA's motivation for this attack was, to use a Ni-Kunni idiom, filling my head with sand.

As Darwinism's media & PR rep, I thought about asking them. I fired off some comms; as and when I get a response from them, I'll update this post. I'm not holding my breath though...

[PHP1] is recruiting! Seriously, we're in a bit of a golden age at the moment and are experiencing a recruitment surge. Not just that, I woke up today and found out that [FCON] are our allies. When did that happen?? 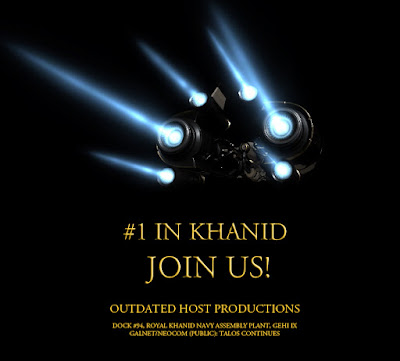 Posted by Cassandra Habalu at 10:54 No comments:

Just a short one today.

Below is a segment of flight data recorder holo featuring His Eminence Sul Glass, Bishop of the Seevadin Constellation and our own Amarrian minister capsuleer (whom nevertheless has a Sec Status of -8.4...), delivering a prayer to inspire and motivate Darwinism's intrepid capsuleers during their recent skirmish in Querious against the defunct Phoebe Freeport Republic and other godless heathens. Even the most pious of the Amarr orthodoxy in the Theology Council will be impressed by this:


Sidebar: I'm concerned about His Eminence, because his security status indicates a personal interpretation of Amarrian Scripture that is tantamount to extremism or even doctrinal schism. I say the Theology Council will be impressed, but I actually wonder if the Council really is fully aware of what he's doing?
Posted by Cassandra Habalu at 04:34 No comments:

Size Matters And Don't Ever Forget It

I'm content to play a peripheral role in Darwinism's ambitions for political autonomy in Khanid. However the ongoing incongruity of being a pacifist in an alliance whose principal objective is piracy is a bit problematic. I'm an artist, not a warrior. It will have been noted that I don't do criminality (although there is a slippery slope - more on that anon), but it's not like I do nothing; for example this journal is Darwinism's principal media outlet, plus there are the freight runs I participate in that generate most of [PHP1]'s income - although at the time of this writing that's on hold as we're being 'wardecced' again because PIRAT's clock-face mentality means the hands of their 'clock' are once again pointing at us (a stopped clock is right twice per day). Yesterday, previous seasonal antagonists Marmite Collective even offered to fight the 'deccers on our behalf. What the hell is that all about??

I'm also developing [PHP1]'s trading policy in the Tash-Murkon region, and it seems to be working better than I expected. I've said it before and I'll say it again: it's remarkable how much more vibrant and active the region is in contrast to Khanid, which, at least from the capsuleer's perspective, is economically moribund and stagnant. Worryingly so in fact.

It's such a radical difference that I'm in the process of shifting most of my personal interests from the chilled out backwater of Danera to Tash-Murkon Prime. I just can't ignore the possibilities therein any longer. This is the fork in the road I was on about last time. The fact that the incoming Empress is also from T-M  is just a coincidence (no it isn't, not really, I just want some of Catiz's profit motive to rub off on me).

In other news (Ape Daily News: it's a thing now), we've built at least two of Upwell Corporation's new Citadels right here in Khanid. One of them is orbiting a terrestrial world deep within the Khanid interior where the renegade Musashibou Benkei will never find it. What a sight this thing must be from the planet's surface: 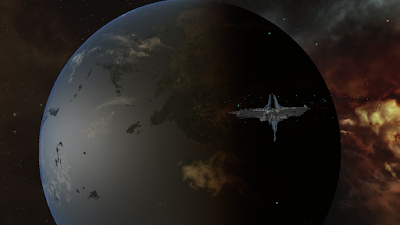 Our other Citadel is in a much more prominent location and was ceremonially visited last week by another Avatar that I didn't even know we had. Note to self: keep in touch with leadership more often - get them to send me stuff etc.. The Avatar belongs to [DRWIN] newcomers Local Spike: 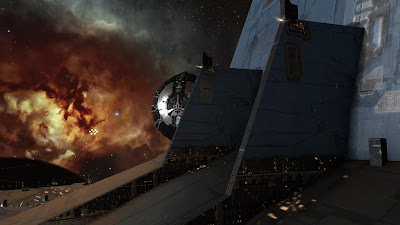 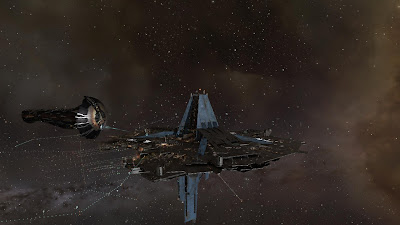 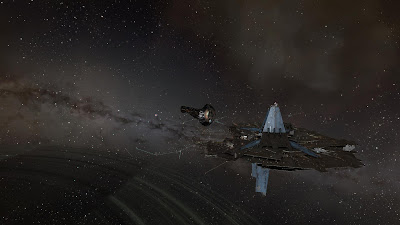 So there are at least two Khanid Titans and two Citadels here. This means we've got at least as many Citadels as Lowsechnaya - I've seen two of theirs in Aridia - and because these things are appearing all over the place then it means one's corporation is nothing unless one has one (CE are you reading this?). The fact that the thing is brand new and is so big that vast tracts of its interior will as yet go unused and consequently you could walk for kilometres without seeing anyone else, is irrelevant. It's worth having one just to see the magic tethering beam work. It reaches out and grabs you as if to rescue you from the bleak indifference of the void.

[PHP1] is recruiting!
Posted by Cassandra Habalu at 09:50 No comments:

Just don't be a complete idiot out there and you'll be fine.


I'm still in Tash-Murkon Prime learning the black art of market trading and trying to measure and subsequently exploit the intrinsic laziness of capsuleers and their consequent willingness to pay over the odds for stuff that is just two jumps away in Amarr at only a third the price.

I'm also lingering here in the hope that some of Empress-elect Catiz Tash-Murkon's affinity for capitalism will rub off on me.

This experiment has made me realise just how dead and borderline-economically-stagnant the Khanid Kingdom currently is. Tash-Murkon as a region is far busier and far more vibrant. All of this has presented me with a bit of a fork in the road. More on that another time...

The real reason for this entry in the journal: I was messaged again by the boss a couple of nights ago while I was in the quarters I'd arranged in the trade hub in orbit around T-M Prime II. It was another 'Urgent Press Release'. I don't think there was any kanar involved again (re: possible obliquely-sarcastic references to Darwinism's 'Glorious Leader'), but this was news of the alliance bagging an Ark jump freighter in Nourbal of all places, which is an uninhabited system without any orbitals or stations to use as safe havens in accordance with accepted jump freighter practice.

Not just that, but this Ark was virtually empty unlike the mythical legend it is named after.

In fact this incident was bizarre in so many ways that I'd rather let the boss explain:

To the Chief Press Officer Cassandra Habalu [FOR IMMEDIATE BROADCAST]:

Sometimes the universe is a strange place and can unexpectedly drop the most unusual events straight in front of you.

Glorious Darwinism leader Jzma was in Nourbal in the Southern Khanid region - well within our sphere of control - doing some exploration when he noticed an Ibis jump into the system and sit stationary near the stargate. Curious, he did some checking on the pilot's employment history and realised it was a brand new, recently-qualified capsuleer. This is a good sign because new capsuleers are often assigned to open cynosural fields for capital ships.

Nourbal is not a normal system to move capitals through as it has no station to instantly dock at when you jump in, so jzma called in [PHP1]'s Tryce Jaor in a hunting ship (Rapier) to sit in-system and watch out for cynosural beacons. 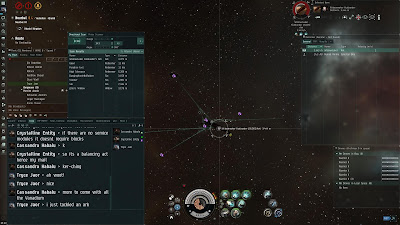 When Tryce arrived in Nourbal, the Ibis warped off. Soon after its Overview designator changed to “Piss Off”. Tryce cloaked and followed the Ibis to a planet and waited. After 20 minutes the Ibis gave up and warped back to highsec. Tryce initiated [Secret Mission #3489: Nourbal Resurgence] and pottered around the system, killing time.

After approximately 40 minutes the Ibis returned and Tryce dutifully tracked it and continued watching it. It was obviously keen to do something in the system. 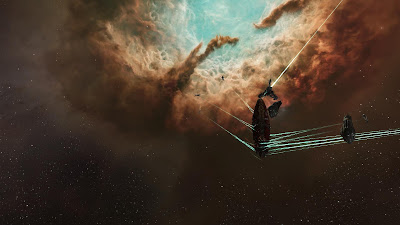 BAM! After three minutes a cynosural field opened and Tryce warped (still cloaked at this stage) to 10km off the beacon; seconds later an Ark jumped into system! 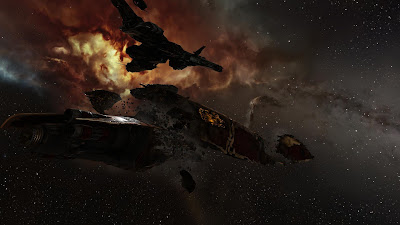 Tryce decloaked, turned Sensor Booster and Microwarpdrive on and rammed the Ark. When his decloak timer had expired he warp scrambled and webbed the Ark and broadcast for help. Alliance capsuleers responded that they were ready, so Tryce opened a covert cynosural field generator allowing Darwinism Black Ops battleships to pour into the system and mob the hapless and doomed Ark.

It was ironic that an act of pure Darwinism was promptly punished by the capsuleers of the Darwinism alliance.

In space, no-one cares whether you scream or not. The above represents the pathos of ineptitude and the brutal shocking indifference of the universe to anything at all. If you've got enough ISK to buy a jump freighter, make sure you've got enough left to buy the instruction manual.


[PHP1] is recruiting!
Posted by Cassandra Habalu at 12:38 No comments: