Our wormhole has spent the last few days in the Republic.

By the time you read this, it will have gone somewhere else. Anyone who lives in a wormhole will know this is entirely normal, as is the bizarre terminology itself - we don't live in a wormhole, we live in a planetary system in the Anoikis Cluster that is accessed through a pseudo-randomly occurring wormhole. I still believe these things are being controlled from somewhere, but there remains no evidence of of this beyond the statistical patterns of manifestation. I believe it, and I'm sticking to it, because belief is all I have in that place.

Belief is my greatest defence. 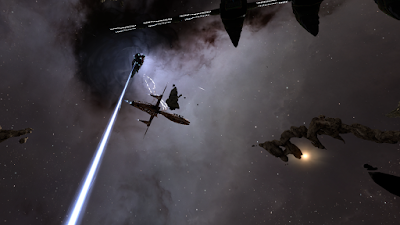 Anyway, our wormhole manifested separately in Heimatar, Molden Heath and Metropolis. It's last few manifestations have been highly karmic, as the wormhole has appeared in incredibly convenient locations for resupplying our citadel.

When the wormhole was in Molden Heath, we were one stargate jump away from the minor, tertiary trade hub in the Teonusude system, so I jumped over to it to obtain some consumables: ammo, reconnaissance and scanning equipment, ship components (ships lead very hard lives in wormholes), cutting-edge holovids, decent coffee, and other catering supplies that are not illegal in space that has no security status. 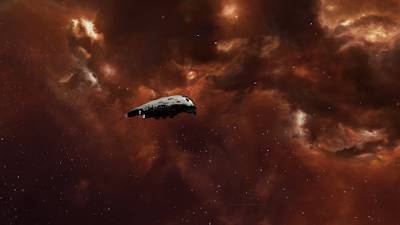 In that system, there is also a Sotiyo Engineering Complex, which, as is common these days, is openly competing with the established trade hub, to the point where I actually ended up docking there instead of the hub. It's all about the tax breaks and the brokerage fees. This has become such a thing over the last year that both economic and actual warfare has broken out between capsuleers over it in the State, as well it might in that capitalist hell-hole - that monument to the myth of endless economic growth. I live in a wormhole now, so it all seems so juvenile and futile. 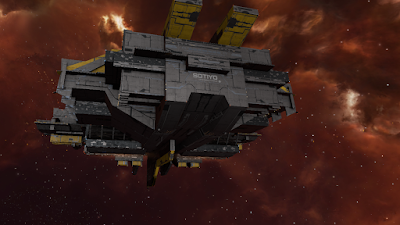 So anyway, the real point of this journal is that I've never seen a Sotiyo complex before in the flesh/metal, so I thought I'd document it. These are the biggest structures that the well shady Upwell Consortium produces and I wanted to find out how tall the letters are in the logo on its outer hull. What stood out about this one was that its owners must have had a developed sense of scenery when it came to selecting its location. 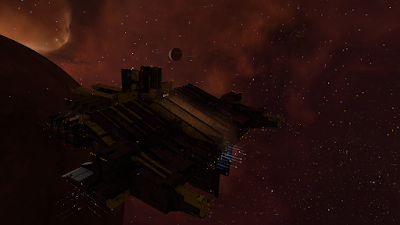 When I saw it, it was on the dark side of the moon it orbited. Since Molden Heath in general is as dark as the hearts of the tribal masses that administer it, the Sotiyo and its war machine seemed completely appropriate here, surrounded by all that blood-red nebulosity. 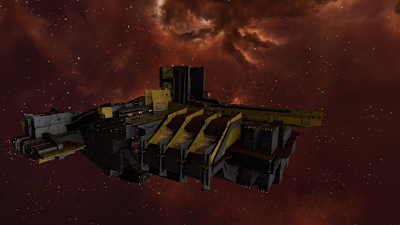 It's always difficult to get a sense of scale in space. With structures like this, your Overview and its distance readouts seem to play tricks on your mind. A Sotiyo is so damned big because it is designed to house capital ships inside it. It would take a week to walk from one side of it to the other. You could even fit President Jacus Roden's ego in it. There are so many docking bays that it's impossible to see the big picture when you're in one. 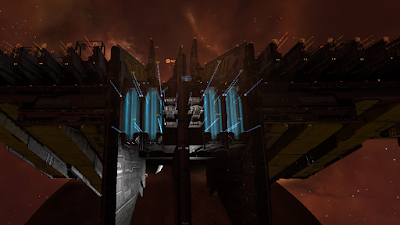 In any case, the wormhole's clock was ticking. Someone in our comms channel mentioned the term 'EOL' - End Of Life - imminent expiry within a couple of hours. I did the trading I needed to do from within my Prorator's capsule by staying jacked-in, got all the cargo loaded on board, and departed, back to the hole, back to the dreamworld. 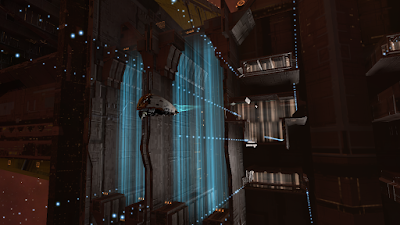 I doubt that 'Sotiyo', one half of the Caldari inventors of the Sotiyo-Urbaata Jump Drive that was the prototype of warp drives used throughout the whole of New Eden today, ever imagined that his name would be on the side of a giant space station, over half a millennium later.

Or maybe he did - Caldari corporate megalomania and all that.

And now, this last week, I heard about Upwell's development of a new type of 'refinery' installation that will be able to detach a piece of a moon's crust and tractor it bodily into orbit, where it can be fragmented into a temporary small-scale asteroid belt and set upon by squadrons of mining lasers. There is an inherent laziness to this technique that is tantamount to environmental terrorism. Speaking of terrorism, it wouldn't be too much of a leap for a capsuleer's imagination to think of using this scorched-earth mining technique as a weapon against an inhabited terrestrial - a grand extortionist's greatest achievement.

The universe is going mad.

Where will it end?

Posted by Cassandra Habalu at 09:25