'Only through many hardships, is a man stripped to his very foundations. And in such a state devoid of distractions is his soul free to soar. And in this he is closest to God'

Emperor Zaragram Ardishapur II is not a name you will be familiar with unless you are an Amarrian theological scholar.

The historical legacy of Zaragram has been suppressed over the two millennia since his reign as Emperor, to the extent that there are no references to him by name in anything considered public record from that long ago. Instead you get non-specific references to the ‘head of state’ or ‘the Emperor’.

The reasons for this airbrushing from history are hard to piece together from what little is common knowledge, but it involves the usual corruptions: obsession with power and greed and megalomania, culminating with Zaragram declaring himself a God instead of being content with merely being God‘s choice of Emperor.

In short, he went completely mad. Totally off his gourd. A crazed dictator with a personality cult.

Examples throughout New Eden history indicate that this level of madness invariably reaches its zenith in a serious edifice complex. Thus it was that at some point during his reign, Zaragram ordered the construction of a series of large space stations in the Shastal system in the Devoid region. This collective was named The City of God, naturally after the God Emperor Zaragram himself, but it is not clear why it was built here in Shastal, 9.8 light-years from Amarr, on the edge of the Empire. 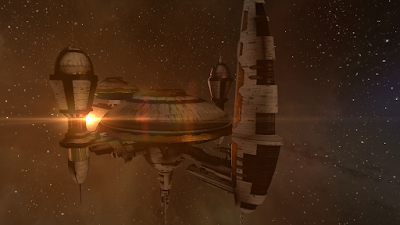 What happened next is again not clear because it was two thousand years ago, but Zaragram died not long after the completion of the City of God, and his death coincided with the inception of the renegade, underground Order of St. Tetrimon as well as inciting a whole raft of purges and doctrinal schisms within the theocracy that went on to last several centuries.

So nothing’s changed there, then. As an agnostic Ni-Kunni in charge of a starship, I can say things like that, even in public.

The City of God was abandoned and left to decay after the demise of Zaragram and his power structure all those centuries ago. It may have been mostly forgotten about by Amarrian rank-and-file since then, but to those of us who have a cosmic perspective it is impossible to ignore, because it still exists today and is a marked and beaconed navigational hazard which appears on our star charts. 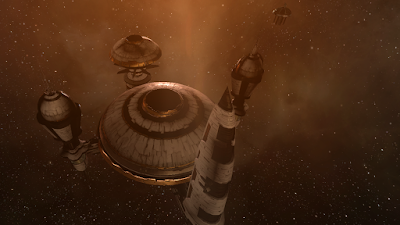 Last week I did the wormhole shuffle from Anoikis and emerged into the Hakshma system in Empress of Amarr. I did a standard operational procedure sitrep to see where the hell I was, and I saw that the Shastal system was just one jump away. The City of God was right there on the map, so I headed straight over there to check out another example of Amarrian architectural abandonware (because I already did the Traumark Installation last year).

Sidebar: Empress of Amarr now looks substantially different from the last time I featured it in this journal. The ship's designers mandated a systemwide upgrade requiring the entire aft half of the ship to be rebuilt in order to accommodate a totally new subsystem architecture, resulting in a massive performance improvement across its entire operational envelope. I never said this before, but I was never totally happy with the ship’s capabilities in its previous iteration, because I came to realise it was never quite as good as it could be for what I wanted it to do; but now, after this upgrade, it’s transformed. It’s a new ship. It’s the ship it could be and now is. 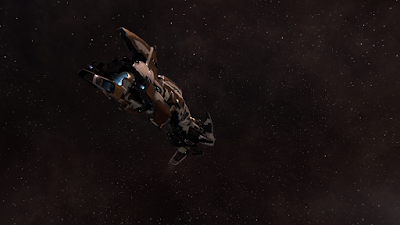 So I arrived in Shastal, saw the City of God on the Overview and warped straight over to it. I expected it to be camped out by Sansha’s Nation pirates as they usually hang out at derelict space stations in this part of space, but no, I had this place to myself. 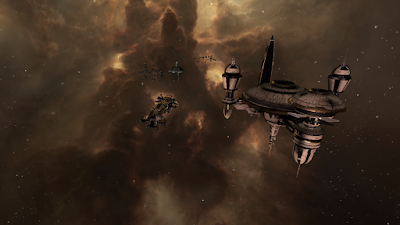 As well as the sole remaining station hulk, there were also a couple of those jury-rigged, ad-hoc asteroid complex things floating nearby: the ones where they hollow out a bunch of rocks and network them together with access tubes to form industrial facilities in arrangements that have no symmetry and must therefore be dynamically unstable ['cos you know how important that is, right? Mass/balance etc.?]. I got the impression the complexes were relatively recent additions to this site as they appear to be active, but you can never tell for sure whether there are people in these things as they can be run on automatic by robots, or occupied by slaves jacked up on Vitoc and living the eternal deathlife of the trans-cranial microcontroller. Or even miners. All those possibilities probably amount to the same thing to be honest. 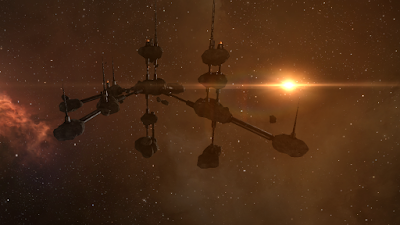 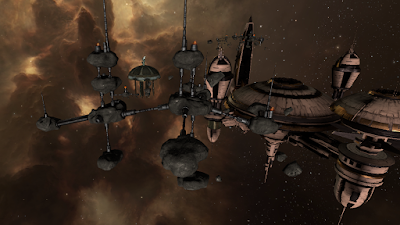 There is a hemispherical dome monument here with a statue on it, presumably of Zaragram. I assume this even though I couldn’t find a single image of him to confirm it, because it makes sense that he would do a statue of himself here. The rest of the complex has that familiar vibe that we’ve all seen in derelicts throughout New Eden: failure, hubris and nemesis. The site has been here for two thousand years. If it’s lasted this long, it will be here for all eternity. 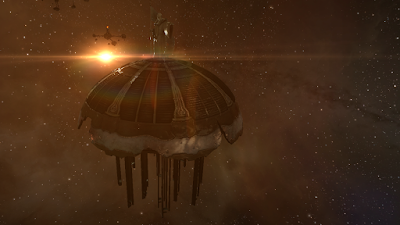 And yet if this structure is such an abomination, such an offence to Amarrian orthodoxy, then why doesn't somebody come down here and blow it up, destroy it, dismantle it, scrap it, remove it from the face of the cosmos? Why leave it here where it can be found? It's another core Amarrian trait: tell everybody that something is wrong and to forget it, then leave evidence of it so everyone can remember what to forget. 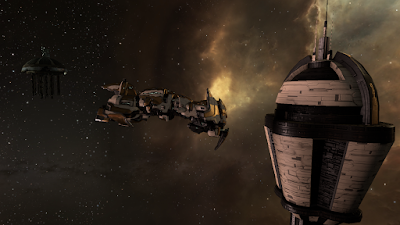 I drifted across the top of the giant station, the design of which is still in use in the Empire today. I had no idea they were this ancient. In the modern equivalent of these stations, the central core dome usually contains its docking bay. Under normal operations, a ship will emerge from that docking bay through the large opening in the top of the dome, so it represents a means of seeing inside it; but all I saw when I coasted over the dome was an impenetrable dark void, which is something that activates my inner Amarrian and causes me to blur the division between science and religion. Some parts of that station will still be pressurised. There will be corpses in there. Frozen meat popsicles. Ancient Amarr on ice. Perhaps Zaragram himself is in there, at one with his greatest achievement. Nothing I read about him suggests he died elsewhere. 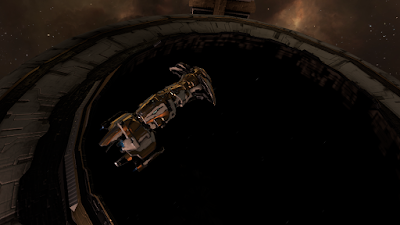 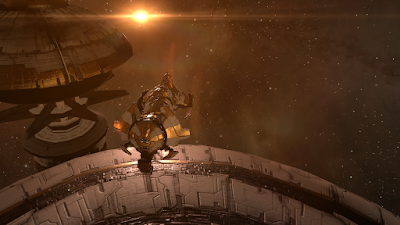 I became aware of a certain kind of historical contrast going on that I had caused by showing up here. Empress of Amarr is the cutting-edge of Amarrian starship technology and embodies the perfect merger of human and machine like nothing else in New Eden. Zaragram declared himself a God in order to become closer to God, but all he had to disguise his mortality was his word. Today, two thousand years after Zaragram and his God complex, I jack into this ship and I become that ship. I get it to do things just by thinking about it, committing actions by thought. I can harness the power of a sun, break the universe's speed limit and traverse a thousand light years in a single breath.

I can also live forever.

To some societies, that kind of power would make me the God.

Posted by Cassandra Habalu at 12:07