Into The Domain of Pochven

'When fighting a stronger army, concentrating your forces only makes you an easier target; better to dissolve into the scenery and frustrate your enemy with the elusiveness of your presence.'

LUMEN historically took a defensive posture with respect to addressing threats to the Empire, preferring to operate within its borders and within the warzone and reacting to events as necessary, 'being the shield rather than the sword'.

LUMEN took the side of EDENCOM during the Triglavian Invasion, sharing that organisation's defeat when the 'Final Liminality' took place and removed three systems from the Empire (along with all the others of course) and placed them under the yoke of the ungodly, beyond-heretical and abominable Triglavian Collective, whatever the hell those things are that speak in arcane and indecipherable riddles of wilful pomposity.

All of the above was before my time in LUMEN as I was on my two-year sabbatical. I have, until last week, had nothing whatsoever to do with the 'Trigs' and their space except for one brief encounter with one of their wormhole portals to the Pochven region which I found in the Villore system a couple of months ago and was like nothing I've ever seen before: 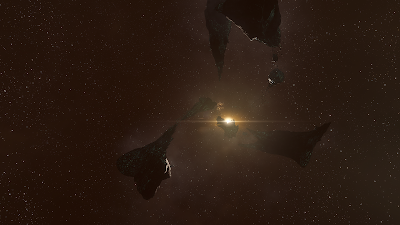 This thing appears to have needed an asteroid to provide some sort of mass or material, distorting it, stretching it, with God knows what quantum effects going on at the focal point producing this wormhole. 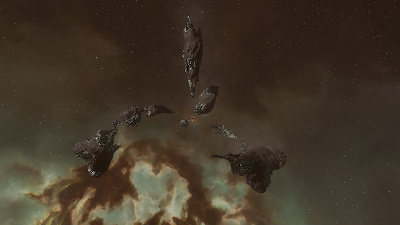 This year, as detailed previously, LUMEN has taken a very proactive position with respect to the Triglavians and their sympathisers/sycophants/handmaidens. The result is joining an alliance of alliances led by Electus Matari - of all people - in an aggressive campaign within the Pochven region against the capsuleer alliance Stribog Clade, who declare themselves aligned with the Collective and in possession of a number of industrial facilities in Pochven.

The problem, for them, is that ever since the creation of the Pochven region, no new structures of any kind have been built there; all the structures that are currently there were already present before the 'Final Liminality' took place.

We have been aggressively targeting the structures belonging to Stribog Clade and hitting them relentlessly for a few weeks now.

Joining these operations required me to actually go there...

So this account describes just one of those operations against a Stribog structure in the Senda system, in again as much declassified detail as I can reveal.

Our fleet consisted of Harbinger-class battlecruisers and Guardian-class logistics cruisers. My ship was the TES Reventador. I'm not used to operating big ships. I'm not used to marshalling a crew, so I tend to delegate a lot. But then a capsuleer-controlled battlecruiser has fewer crew on it anyway (still several hundred, mind), and they are reduced to a care-and-maintenance and watchkeeping role as the capsuleer performs the roles of several of the ship's departments from within their own heads and their neural links, and could essentially run the ship themselves, if it wasn't so damned big. Stuff breaks and needs replacing, fixing, etc.. 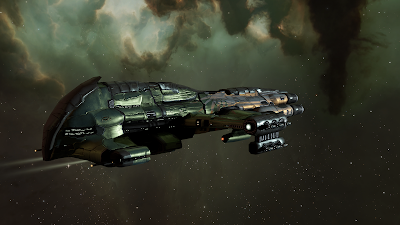 Our fleet departed our Astrahus in the Mehatoor system and we assembled at a 'safe', still in Mehatoor and well out of the ecliptic and far away from any gravitational influences. We tested our systems, ran a few drills, then our fleet commander Zek gave the word - 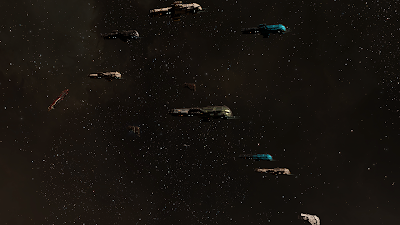 - because we used the other method of gaining entry to the Pochven region: a 'Home-15 'Pochven' Filament' device, warping us all en masse simultaneously through our own self-generated hyperspace conduit - 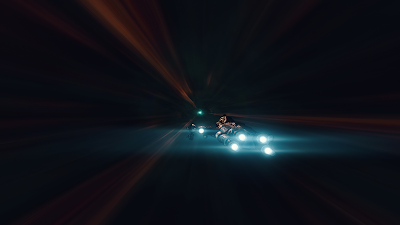 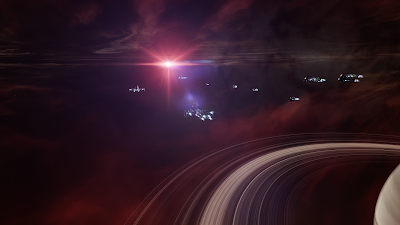 ...where I was stunned at how much the environment had been altered by this Collective, who have the power to manipulate the output of a star and transform its very matter into something else - controlling it.
The Anoikis Cluster has an ancient, decayed, static vibe where the threat seems remote because the Anoikis Cluster is over a thousand light-years from New Eden; we can get there, but it can't get to us.
Pochven is right here, among us. All those systems used to be part of New Eden before they were changed by these transhumanised monsters who are self-evidently decades if not centuries ahead of us technologically.
We have the power and ability to access higher dimensions of space by digging holes in the quantum foam of spacetime to make our jump bridges, stargates, FTL drives and fluid router comms; but the power to control the output of a star and reconfigure the environment around it to suit one's purposes is on another level entirely.
It is godlike.
It is scary.
Now I was here, within it. 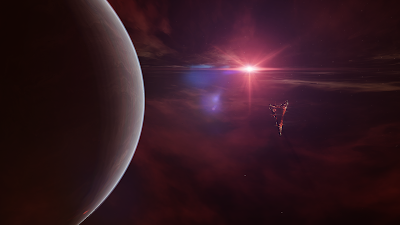 We transited to our target in the Senda system. This operation was an 'Armor Timer'. We needed to disrupt the structure's defences to the point where we could come back a few days later to finish it. We warped in and got to work: 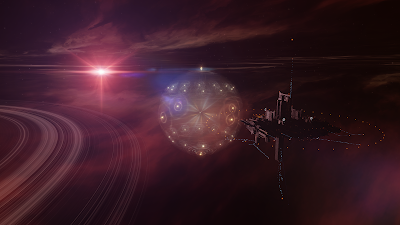 Shooting structures is not difficult, and can even be tedious. 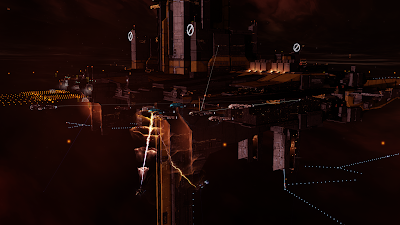 But not this time. Stribog could show up at any minute to defend. 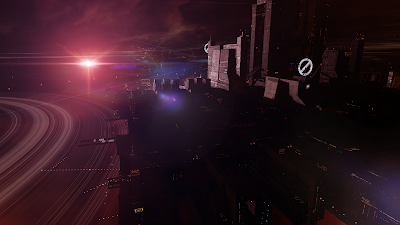 We waited for them as we hammered the structure with Heavy Beams and drones.
We kept waiting... 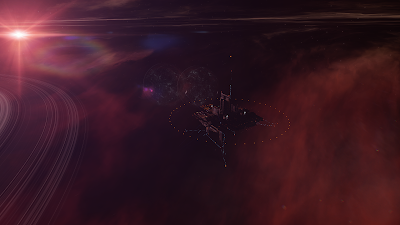 We were fully prepared for a response from Stribog Clade, but in this case we caught them completely by surprise. It took them so long to form a fleet from wherever else they were stationed (not in the Senda system) that we were able to finish the job and get out of there just as their response fleet entered the system. 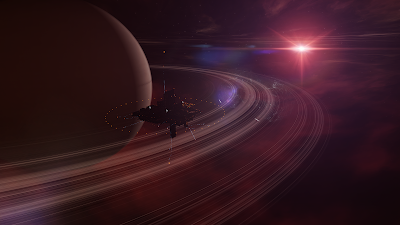 What we were not going to do, which would be the mark of the amateur, would be to exit the system through its access wormhole, which Stribog would of course camp on as their first tactic.
Instead we were going to exfiltrate, or egress, or exit the system back to New Eden using the same Filament method we used to get in here - far classier, far more sneaky and devious and far more stylish. But we had to wait approximately fifteen minutes for our ships' navigational systems to recalibrate and reconfigure in order to use the Filament device.
So in an absolutely brilliant masterpiece of planning and execution and leadership and coolness under pressure, we used a series of tactical 'safes' - random positions in space that had been laid down previously throughout the Senda system, dozens of them - to bounce the fleet around the system in unpredictable directions while we waited the necessary fifteen minutes, and in order to evade the Stribog response fleet (such as it was) that was attempting to locate us using Combat Scan Probes - a tactic we anticipated, hence the 'safes'. 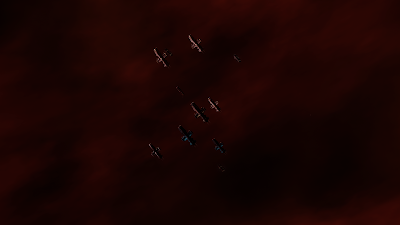 It was the longest fifteen minutes of my life, and if I could have bitten my nails while jacked into a capsule then I would have because the tension was incredible. I don't think the result was ever in doubt though; I don't believe Stribog would ever have caught any of us: we were too good, too quick, too elusive, too well-planned, although we did see Combat Scan Probes get within 1 AU of us as the fifteen minutes finally ran out.
All our timers reached zero.
We were ready.
For this we all carried a 'Glorification-1 'Devana' Filament' device in our ships. There was no need to jump out of there as a fleet this time, so the order was 'Drop fleet and use the Filament'.
'Dropping fleet' was simply offlining my ship from the data network any fleet uses to communicate and coordinate itself.
Using the Filament device was another matter entirely. It opened up another hyperspace conduit, as before, that looked very different from those generated by a stargate.
And so we just disappeared... 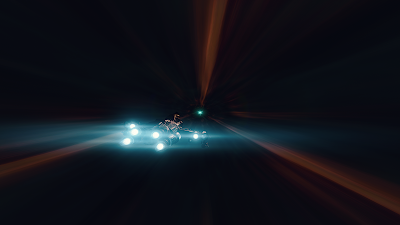 The condition of using one of these devices is that you have no control over where you emerge from hyperspace, other than it generally tends to be in a system that the Triglavian Collective occupied during their invasion (before Pochven was created).
TES Reventador arrived back in New Eden in the Aldik system, in Metropolis. The Republic. Not actually that far from HQ in Mehatoor and all-highsec all the way back. I was relatively lucky. Some of us ended up half way across the cluster in Aridia. 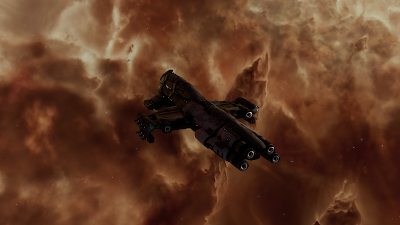 Nevertheless, we all made it out of there, intact, with no damage and no losses of either ships or crew. A fantastic result, and celebrations all round as and when we all got back to Mehatoor.
I set course, and let the ship fly itself, glad to be out of that place... 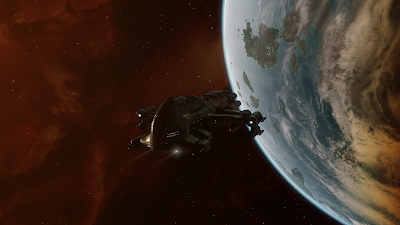 All of what I've described above took place a couple of weeks ago. At the time of releasing this journal, our campaign in Pochven is effectively over. Our ad-hoc alliance of alliances destroyed several of Stribog Clade's structures, rendered the rest effectively useless and forced Stribog to resort to evacuating the region, self-destructing their remaining assets and publicly blaming Electus Matari for their defeat. I will not burden you with any of the details of the fallout from it; you can find it on all the usual independent capsuleer comms networks and all the usual news resources, and read it for yourself.

To listen to Stribog's rhetoric, one would think that Electus Matari was the sole aggressor, which it was not. Some in LUMEN are aggrieved by this lack of credit. I tend to think that our 'anonymity' in this affair is advantageous, because our standing in the wider cluster and our regular and future operations will not be negatively influenced.

I only played a small part in this campaign. Our leadership and many of our members were present for the whole thing, the most noteworthy and consequential being a 'suicide mission' on another Stribog structure where LUMEN's entire fleet of Typhoon-class battleships remained on the field to ensure the destruction of the structure, the fleet being destroyed in the process. A great many LUMEN crews' lives were lost.

SFRIM's Brother Theodosius Savnar was instrumental in recovering and repatriating much of their remains (his own account can be found here), after which we held a memorial service in the Nahyeen system, which I attended. The service was a stark reminder of the reality of starship combat, and how capsuleers tend to disregard the baseliners on their ships when considering losses, instead thinking only in terms of material cost. I was humbled by the service, where emotions ran high, and I was honoured to be a part of a capsuleer alliance that showed such respect for its lower ranks.

They will be remembered as true Amarr.

Posted by Cassandra Habalu at 12:20