Back when I variously and at different times lived in Khanid and Genesis, a fleet of freighters was a rare sight. Now, living in a highsec 'pipe'** system, I see this sort of thing all the time, although it's no less spectacular for it: 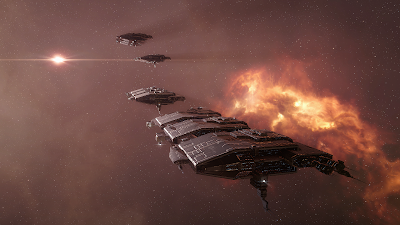 **This pipe being what became, after the Triglavian Invasion and their 'Final Liminality' event, the new principal artery between Amarr and Jita that was for a time called the 'Silk Road' after some obscure and ancient cultural reference that is lost on me.

Posted by Cassandra Habalu at 03:59