No Sleep 'Til Syndicate

As may be apparent already, I'm spending more time in the Syndicate lately. In fact as I type this into my datapad, I'm pulling a shift as duty capsuleer-in-command of the citadel's defensive arsenal. Evening prayers were observed before I signed in, and I have another three hours or so in the chair here. Since it's quiet outside - and at this hour nothing is likely to happen - I'm running simulations, readiness checks and inventory assessments on the weapons with the other personnel here, while intermittently monitoring the intel channel for passing traffic and reading some news feeds, with an edition of Aridia Tonight playing on a holovid in the background. I enjoy these quiet contemplative periods that are as enriching at the helm of a heavy weapons battery as they are in my quarters or in chapel.

Syndicate is an interesting place. Cosmopolitan doesn't even begin to describe it. There is a lazy trope in circulation which asserts the Syndicate is a 'wretched hive of scum and villainy'. As trite clichés go it is as bad as asserting that 'all Amarrians are slavers'.

It's there if you want it, of course. This is null-security space. But in I-RED's 'pocket' there appears to be a cordial relationship between I-RED and the various Intaki Syndicate operations and we all get along and do business and repel undesirables wherever they are found. At our base in the Cathedral of Syndicate in XS-XAY, we are free to practice our faith as if we were anywhere within the Empire, and we are free to exert God's will on His behalf on anyone passing through the area who deserves it, and life is generally pleasant. A homeostasis of trade exists here. No big power grabs, no wars. Almost self-policing in a way.

One's word seems to mean more here. Problems get sorted out on their own.

Syndicate is also close to the Cloud Ring Nebula. It is to me the most distinctive and aesthetically pleasing of all of New Eden's nebulae. I first saw it for real during my first ever 'roam' into the 'CalGal' warzone as a novice capsuleer when I first joined Outdated Host Productions. No book, holo, immersion sim or anything like that can compare with seeing the real thing through cam drones and the image-intensifying algorithms of a capsule.** 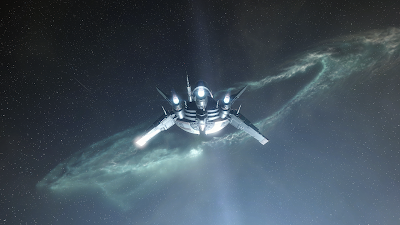 It was first suspected to be a supernova remnant by the Intaki astronomer Alnadil Jouber who also theorised that the supernova had produced gravity waves that had destabilised the EVE Gate. This theory is no longer considered plausible as the nebula's rate of expansion proves it to be ancient. Besides, if it was a related event then there would be documentation of the supernova somewhere in the 'fossil record' that comprises the impenetrable and inscrutable jigsaw puzzle of incomplete paleoknowledge that still exists from before the Dark Ages. Somebody, something would have remembered it. I've spent enough time in Relic Sites to be aware of how much random disparate information still floats out there concerning the period.

I tend to transit between the Cathedral and the trade hub in the Dodixie system a couple of times per month on supply runs. Mostly in my faithful Blockade Runner Motorhead, sometimes in a shuttle. Flying back from Dodixie and the Fed means I have the Cloud Ring on the nose, guiding the way, like a pole star, like a Guiding Light - His Light and His Will, no less. It is no wonder it is starting to feel like a second home.

Syndicate, with its Intaki 'city state' stations and its greater capsuleer influence, is what the Fed could have been if it wasn't for the Fed itself.

Solitude, on the other hand, is a different matter entirely. They say the new stargate has ruined it...

**A nebula is normally so faint that you would barely see Cloud Ring (or any of them) with the naked eye even from right inside it. It is truly a gift to be a capsuleer.

Posted by Cassandra Habalu at 14:32