The Vicinity of the Fourth Moon of Jita IV, earlier this year

'This place is unbelievable. You know ever since they built the extension, that's no space station anymore, it's another moon. I don't know why they don't just call it that. Tow it into orbit around the planet and leave it there. But yeah then they built the elevator, so at least there's that.' 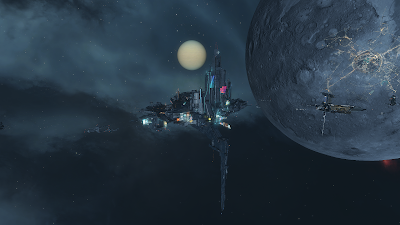 'You can get anything you want in this place. Anything. Think of anything you might want no matter how straight-up or deviant you are, and somebody else will be doing it here. Or selling it for that matter. Commerce is the only religion here. Vices, virtues; sins, morals;  redemption, ruin; it's got the lot. Fortunes are won and lost, sometimes all in the same day. To most Caldari this place is a cathedral. Where else can a dress cost more than a battleship? How messed up is that?' 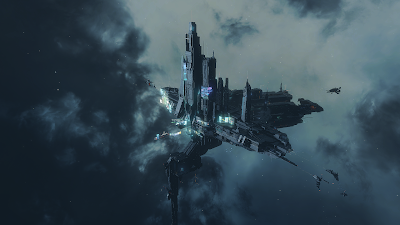 'Nobody knows where this place is controlled from. How can you control anything so big from one place? Easier to think of it as a microcosm of New Eden itself. You know, different regions. But then it's also the purest expression of the free market that has ever existed, and ever will exist. Nothing but the market. No borders, no regions. Everything comes from the market and everything gives to the market. The market giveth and the market taketh away.' 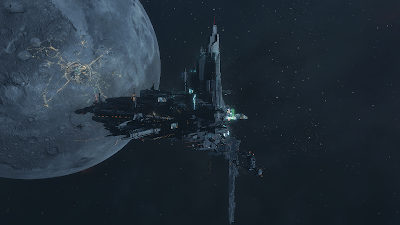 'You know there was the Amarrian who lived here and went mad and started rounding up Matari - he'd advertise some sort of tribal reunion or something and they'd show up - and then he'd lock them in a cargo container. The inside of the container would be full of lights and cameras and audio. He'd hack into a live broadcast feed, he'd take the container out in his ship and cast it into the atmosphere of the gas giant and recite Amarrian scripture to them as they got incinerated, and this is what he'd broadcast live. I mean what a sicko. He kept going on about "cleansing infidels with holy fire". He did this twice a day for about five days before he disappeared. I mean somebody must have got to him, right?' 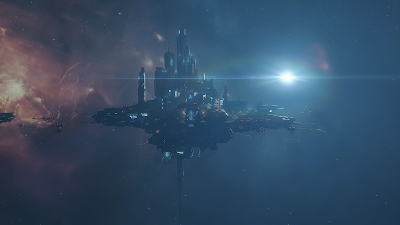 'This place kinda polices itself. There's a security staff of some kind, and there are thousands of them, but they only investigate high level stuff that interests them. Think about it, the place is so big you can't police it. Keep a low profile here and you can get away with anything. Murder is rife. Rife I tell ya. Don't get me started on what goes on right outside the front door with all them eggers. They're out of control I tell ya. But then without them this place would still be a manufacturing plant for the Navy.' 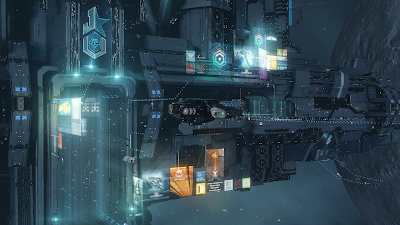 'I took a job on a loading dock for a few days while I was on layover between assignments. I was bored, really, you know, 'cos even in a place like this you can still get bored. But I got scared to death so I quit. I saw a dude get chopped in half by falling armor plates and they just left his dead body lying there, I think they put cones round it. It was like an hour before some robot cleaned him up. I saw a dude get dissolved in front of me when some nuke shells he was handling leaked on him. It ate through the damned floor and landed on some other dude's head on the deck beneath and there was just his legs left. And then I saw some really shady stuff like containers full of active stasis pods where the manifest said biomass for clone regeneration, so that was literally like people who thought they were colonists or passengers or something but they were going to end up having their bodies used for parts or their minds replaced with something else. It was going to somewhere in Delve. I mean, Delve! You know who operates there don't you? And nobody said a damned thing!' 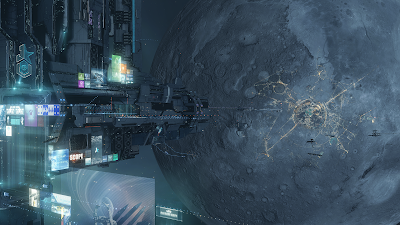 'The volume of trade in this station at any given time exceeds all the other trade hubs in New Eden combined by a hundredfold or more. The Grand Concourse is so big you can live your whole life there and never see all of it. It's so big it has weather. Actual clouds. It rains. I'm serious. Get me another drink will ya?' 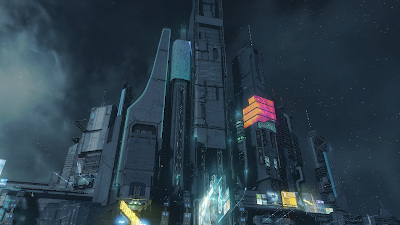 'I heard somebody does actually live in a penthouse apartment right at the top of that tower. But nobody knows who. Maybe it's like some sort of God. But then I heard there's a room up there that has a portal to UUA-F4 in it. You never know. This is Jita, it could be anything. I mean a large part of the whole station is given over to engineering and maintenance and manufacturing the equipment needed just to run it, just to keep it going. But even then the place is still massive. There are huge spaces that have a biosphere or terrarium or whatever the word is. There are communities that live in them that probably don't realise they're in a space station.' 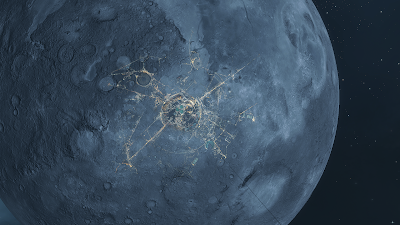 'I think it's a mining station down there. DCM runs the elevator. I think it could be a theme park. Not many people come back. One-way tickets are very popular I hear. Don't know why. It's an airless moon. Some people just love a hard time. Maybe it's full of monks. But this is not Domain. Maybe it's the Feds. There's a lake you can swim in. It's under a bubble. In low gravity. Imagine that!' 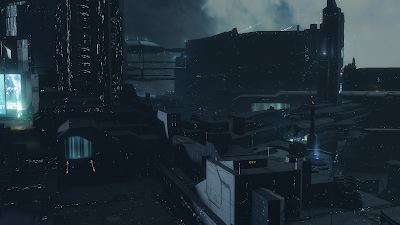 'You know how they say you can get away with anything? There was this woman who ran an organ-harvesting operation, something to do with biomass for clones or whatever. I never saw this place myself but there was an advert on holo that ran for a couple of weeks. "Experience life as a capsuleer" it said. Plug you into it somehow and you'd do some sort of video game capsuleer holo-immersion thing in your head but it was really a euthanasia machine. People would pay this woman a bunch of money and they'd think they were experiencing capsuleer death, you know, she'd kill them and they'd be excited about it. I mean a capsuleer simulator? Didn't the name tell them anything? That lot regenerate afterwards. Some people are just idiots. But then the worst of it is I heard the the other thing she'd do is sell some of the meat to restaurants without them knowing what it really was and she made a ton of money and left for Molden Heath. She was never caught. I heard it was human ears in fried batter, you know, people loved it!' 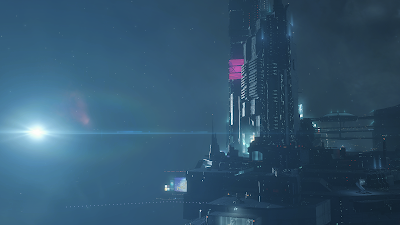 'The holo billboards on the outside are bigger than battleships. You know in different radio frequencies they're brighter than the sun. The power generation for that, you could run a planet. This place couldn't exist without ISK. It is ISK. But ISK doesn't exist because it's not a physical currency. There's your paradox. This place is so big, if you blew it up you'd get a nebula. A nebula of money.' 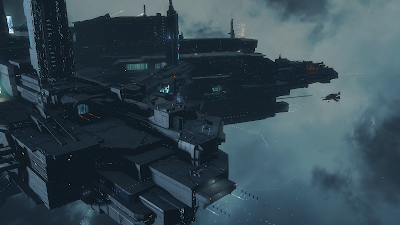 'I'll tell you what it is. It's like a damned ant farm. With spaceships.'

Excerpts from 'Rough Guide to the Trade Hubs of New Eden, Vol 1: Caldari Navy Assembly Plant, Jita IV-4  - Chapter 10: Culture and Lifestyle - What to Expect When You Visit' 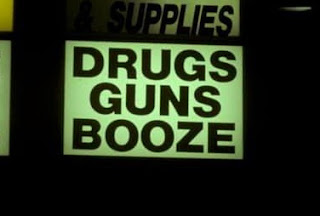 Posted by Cassandra Habalu at 11:24